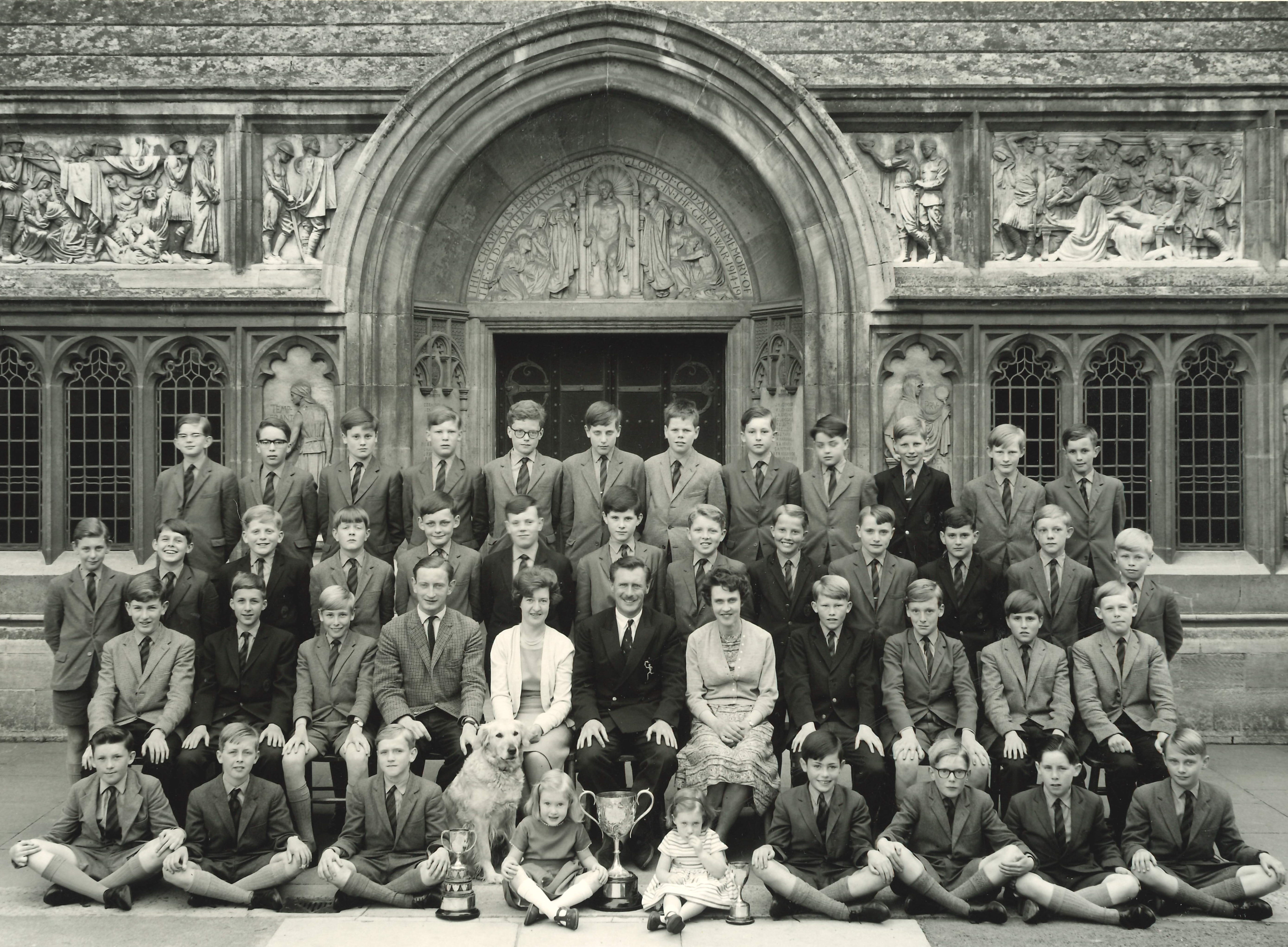 Before the girls arrived in 1971, the boy’s uniform was standardised. Lower school boys wore mainly grey, tweed blazers in the late 1960s, with a grey colour shirt. These blazers did not have a school badge. Most of the boys wore trousers but a few in 1967 wore shorts.

For middle school boys, a change occurred in the early 1970s where grey tweed blazers were phased out in favour of black blazers. Some of the black blazers have crests on the top right pocket. These crests were awarded to those with school sporting colours. A diamond around the crest symbolised cricket colours; a red oval around the crest showed rugby colours; crossed hockey sticks advertised hockey colours; and finally, an oval of laurel wreaths showed an athletics colours owner. Middle school boys wore white shirts and a tie. This tie contained a black stripe, a stripe showing the house colour, and surrounding this, two smaller white stripes. 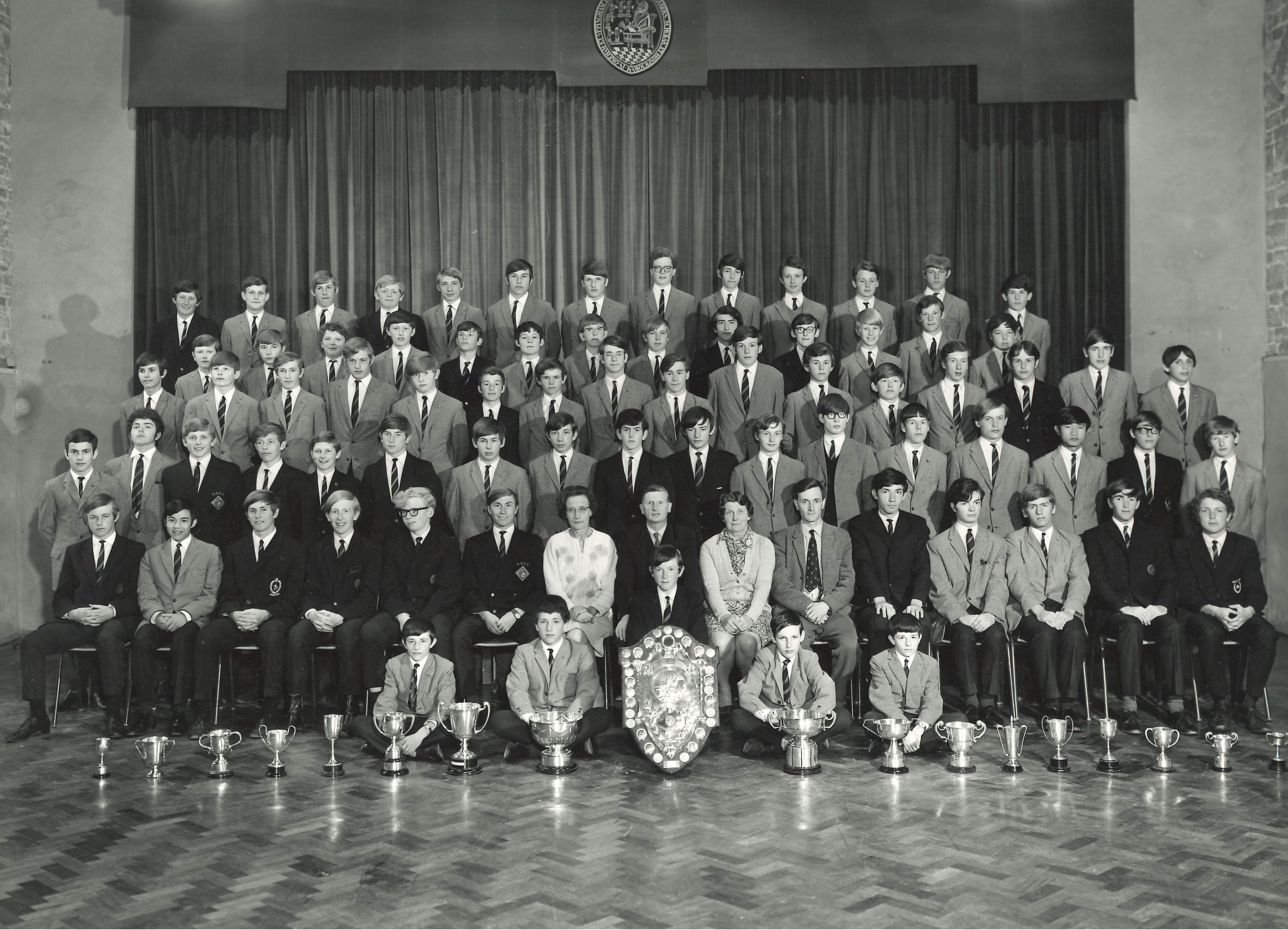 “common uniform bound members of the School closer as a community” 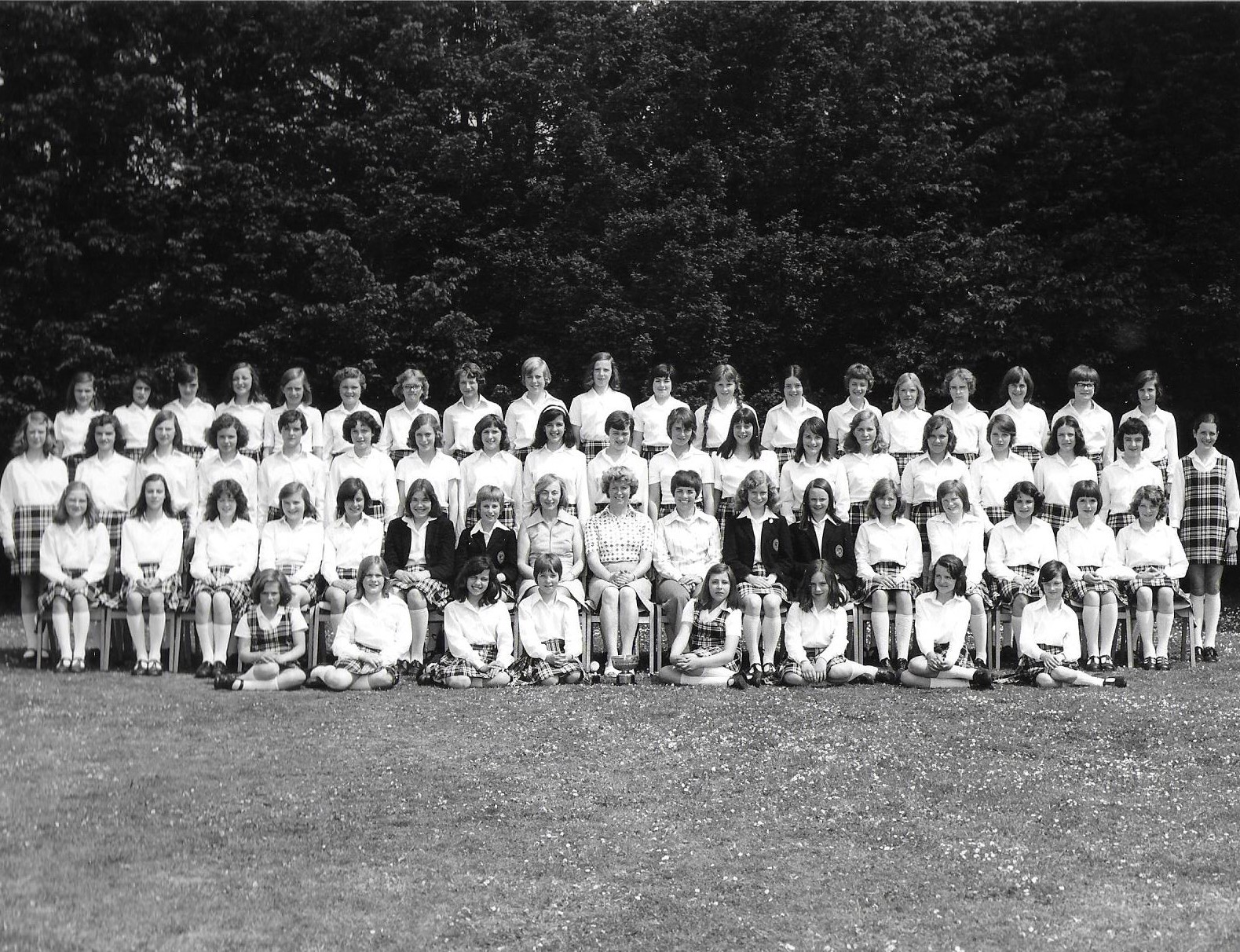 The basic girls’ uniform consisted of a check (Buchanan Tartan) skirt, a white shirt, black jumper and a blazer. The PE kit for the girls was fashioned from the existing boys’ sportswear: rugby shirt, black shorts and socks, plus a cricket jumper. There are several references to parts of the girls’ uniform which are not documented in any archive photographs. These include a maroon blazer, red shirts, red jumpers and capes!

One of the memories, amongst others that stood out for me, was wearing a cape! This was part of the uniform over our blazer and as I rode my bike to school, it was a bit like a superhero, as it flung out in the breeze behind me!

Alongside a skirt, which is still part of the girls’ uniform today, some of the first girls could also wear trousers and pinafore dresses. Initially, girls could wear trousers all year round until 1974 when it was proposed that their use should be restricted to the Winter months. In a school council in 1974, Ruth Oliver explained the dislike of the present style of tartan trousers, preferring plain black. Sadly, Ruth’s proposal was rejected, and black trousers are still not part of the girls’ uniform today. 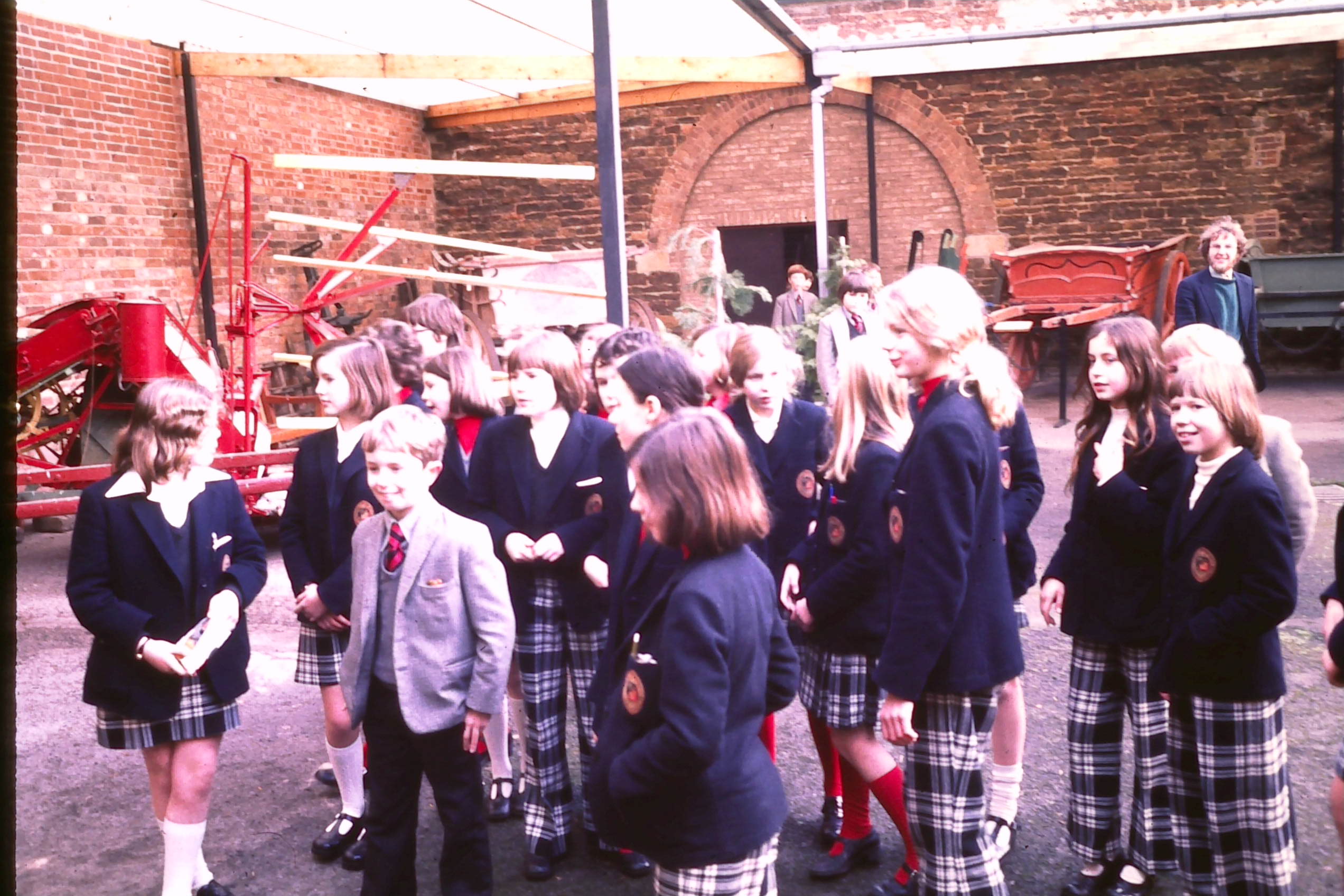 During the first few years of girls at Oakham School, there seems to have been some difference in the enforcement of a uniform. The girls seem to have had much more relaxed rules than the boys. Sixth and seventh form Oakham girls did not wear a uniform in lesson. Uniforms were only worn for special occasions and chapel. Sarah Glover wrote in the 1971 Winter term Oakhamian that the reason for this was because “the majority of girls’ public schools […] have been out of uniform at fifth-form level for the last five or ten years”. Obviously, the rules and regulations in place at independent girls’ schools across the UK heavily influenced Oakham’s policies towards its first intake of girls. This leniency towards girls’ uniform caused some jealousy especially with sixth form boys. Sixth formers were required to wear full school uniform. So, in 1974, it was agreed that all sixth form girls would wear full uniform like the boys. 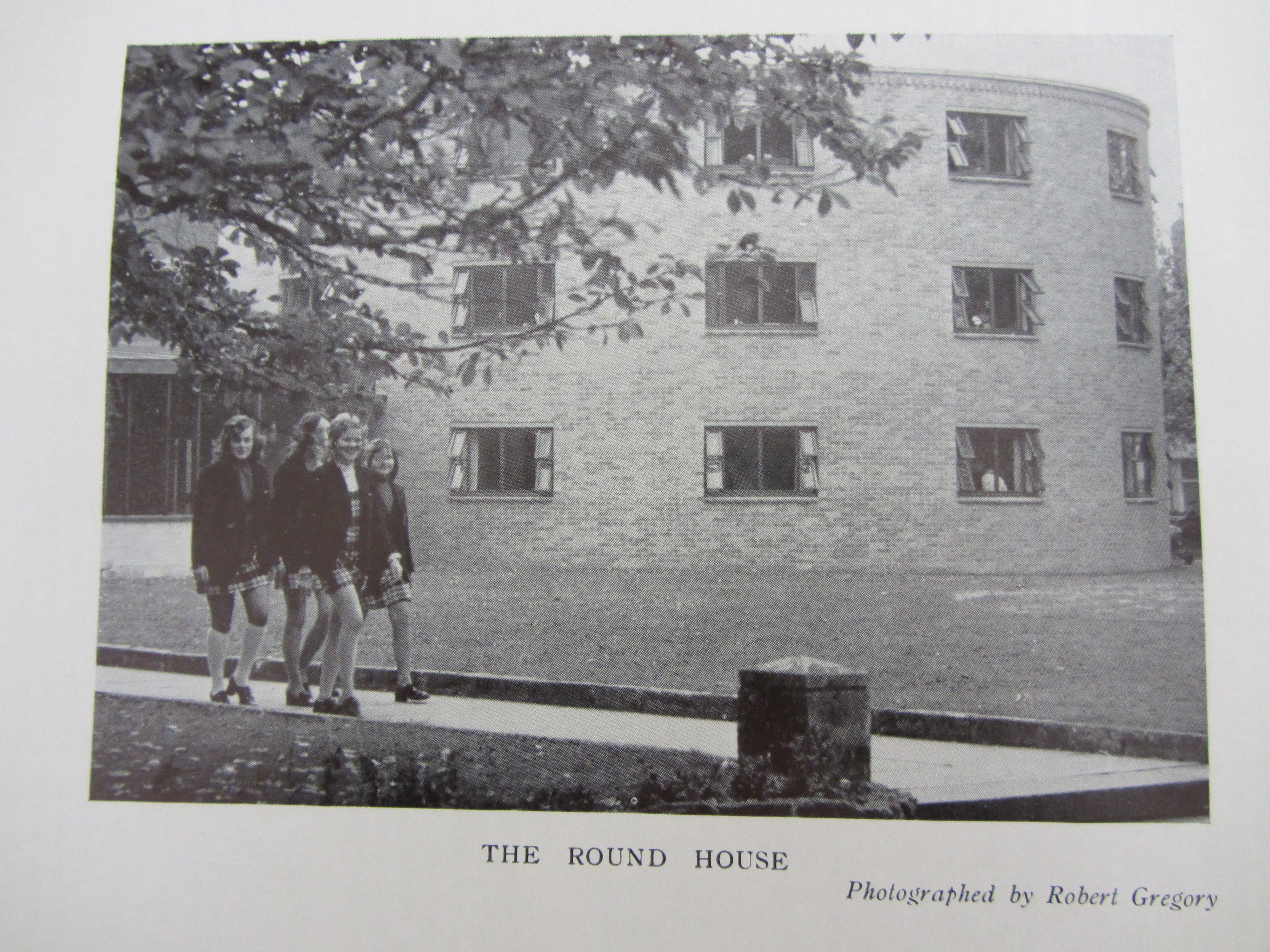 Girls outside of Round House wearing tartan skirts and a pinafore, 1972. Copyright Robert Gregory.

Changing with the Times

Across the 50 years, boys and girls are asked to wear sensible black shoes. But as fashion trends come and go, some restrictions and clarifications to the rules are needed. In the 1970s, pupils petitioned the school to allow the wearing of boots. This was dismissed by the then headmaster, John Buchanan, with the statement that wearing of boots would “call into question the idea of having a uniform at all”. In the 1999 and 2005 clothing and equipment brochures, shoes had to be black leather: no suede, buckles, canvas, coloured laces, kitten heel or nubuck. Shoes should be flat but interestingly for girls in 2005, ballet shoes were forbidden.

Some of the first girls who came to Oakham School were allowed to wear trousers. However, the tartan trousers were not very popular and skirts became the required uniform. This would not stop girls from appealing to the school council to be allowed to wear trousers, especially in the sixth and seventh form. Girls felt that trousers would be warmer in the winter and be a “further indication of equality and coeducation” in the school. However, this proposal was frequently rejected and even in the 1990s, the idea of girls wearing trousers was thought to lead to “untidiness”.

Over the years, different styles, cuts and materials for trousers for both boys and girls have been discussed. Some suggestions include flares, black cords, jeans, and wide leg. Today’s boys and all seventh formers are recommended to have tailored trousers; lower and middle school boys wearing a charcoal grey trouser, and seventh formers trousers should be part of a suit.

The girls’ skirts have changed relatively little over the years in terms of colour. In the 1980s, girls could make their own skirts (adhering to a specific pattern – Simplicity 5204 view 2) buying the material or an official school skirt from the school shop. Nonetheless, not everyone followed these instructions. When straight skirts were proposed to the school council in 1983, the response was that “very few people were actually wearing the regulation skirts” and some girls wore their skirts “ridiculously tight.”

Over the years, the Oakham School blazer has been a variety of colours. Until the mid-1980s, most of the boys wore grey tweed jackets brought from Furley and Hassan's. Until as recently as 2001, it was thought that an all-black uniform with a black blazer, was too “sombre”, and hence why the navy-blue blazers were favoured between 1998 and 2006. Black blazers were introduced in 2007.

Jumpers have had an interesting development at Oakham. Many pupils can be seen wearing them in school photographs and these are typically a black v neck jumper. Over the years, proposals have been made to introduce a polo necked pullover in possibly black, light grey or red (1974) and red or charcoal grey pullovers for the girls (1980).

Most of the references to hair and makeup that are in the archives actually relate to the boys and not the girls. In the late 70s/ early 80s, boys in the seventh form were eager to be allowed to have beards or moustaches (64% were in favour). Staff members were generally for the proposal personally but felt that the issue was the growing of and not the beard itself. During this phase, the boys would look unshaven and “scruffy”.  Interestingly, some also felt that some boys who could not grow beards would feel inferior, so consideration about equality and mental health was given alongside physical appearance.

Girls were allowed to wear one ring, one chain and a pair of small stud earrings. Throughout the 1980s, the boys frequently asked for the right to wear makeup and jewellery when in casual clothes. The motions were generally approved by the school council but were repeatedly rejected by school management.

Over the years, proposals to either change or add to the uniform have been put forward by pupils. Some are considered strange whilst others not so shocking. For example:

For the boys, house pride has always been shown through their ties. Boys’ ties are stripped alternatively with black and their house colours. Middle school ties have the addition of thin white stripes surrounding the house colour.

The story of house pride for the girls is a little more discreet. With there being so few girls houses in the 70s, “it was decided that the girls neither needed or wanted an identifying mark”. However, as the girl population grew during the 1980s, more houses such as Rushebrookes and Stevens were formed. To help distinguish between the girls houses, a coloured stripe appears to crown the top pocket on the right hand side of their blazer. Then in the late 90s/ early 2000s, it was decided that a badge for the girls should replace the pocket stripe. Around 1999 an initial badge was introduced but students complained in the school council that there was difficulty in distinguishing between colours. So in 2000, new badges were introduced to counteract this.