The British had claimed sovereignty over the Falkland Islands since 1833 when they through out Argentine occupants. Since then Argentina argued their claim to rule over these islands.

In 1982, General Leopoldo Galtieri of the Argentine Military, led a junta to the Falklands. This junta was criticised economically as well as many raising human right concerns, however many Argentines thought that it would bring the nation together. So on the 2nd April 1982, the Argentines invaded the Falklands; taking over Port Stanley, the capital. By the end of the month, over 10,000 Argentine troops were on the Islands but they were poorly equipped and trained.

In response to this attack, the British government quickly assembled forces to send the 8,000 miles over the seas. This included two newly built aircraft carriers, HMS Hermes and HMS Invincible. Many of the soldiers were stationed in Germany because a conflict with the Soviet block was seen as the most likely military outcome in the 1980s.

On the 2nd May 1982, HMS Conqueror sank the Argentinian cruiser the General Belgrano, although it was sailing in a direction out of British waters. Over 300 members of the crew lost their lives. After this act, most of Argentina’s naval fleet stayed in the ports. The Argentine RAF however were still going strong and kept on destroying British ships, frigates, destroyers, and a container ship. On the 21st May 1982, the British landed unopposed on the islands and began to fight their way towards Port Stanley. The British soon surrounded Port Stanley and it was clear that the Argentine forces were cut off and under siege. So the Argentina surrendered to the British on the 14th June and on the following day the paras and marines began to disarm the Argentine forces.

Some 650 Argentine and 255 British lives were lost during the conflict. Mrs Thatcher, the Prime Minister of the UK at the time, had her popularity bolstered exponentially, helping her to achieve a victory in the 1983 general election.

Britain still retains control of the Falklands and in recent years, islanders have voted to remain part of the UK. 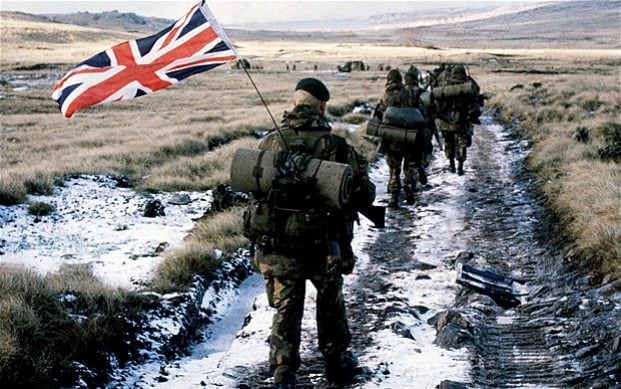 Image courtesy of The Telegraph, https://www.telegraph.co.uk/news/2018/03/19/day-1982-falklands-war-begins-argentine-flag-hoisted-south-georgia/.

Simon attended Oakham School between 1967 and 1972. He was a member of School House.

Simon attended RNC Dartmouth after leaving school. He achieved a FCILT (Fellow of the Chartered Institute of Logistics and Transport). He went on to have a career in the navy, as a defence logistics consultant and in farming. He was Lieutenant, later Commodore serving on HMS Spartan during the Falklands War.

He was awarded a CBE.