Hello and welcome to our spring term 2021 exhibition. The theme of this exhibition was inspired by the lady to whom we have dedicated the first shelf to. Helen Pollard.

In 2020, Helen was awarded an MBE for her services to physics education. Helen taught at the school between 1979 and 2009 (with a break to raise a family from 1991—2001). She was the first female housemistress at Oakham and supported the introduction of Extreme Physics, a team challenge for young physicists, at Oakham and in several schools around the country. Outside of the classroom, Helen was a Duke of Edinburgh assessor, a tutor and a Crest and Engineering scheme leader.

Helen is fondly remembered for her “lively and imaginative experiments”, cheerfulness and her ability to explain complex ideas in accessible ways. She worked hard outside of school to promote physics education and helped to mentor teachers in delivering outstanding lessons. 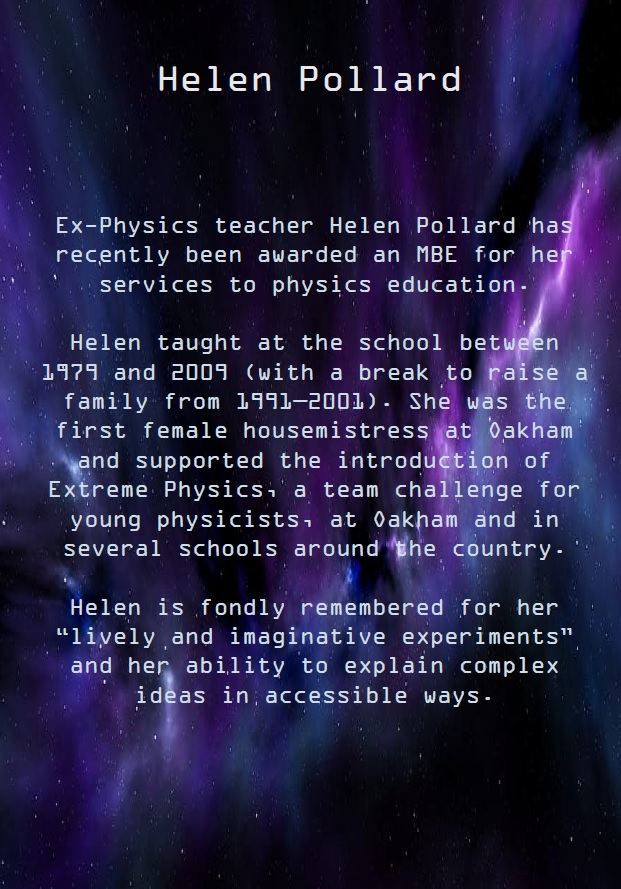 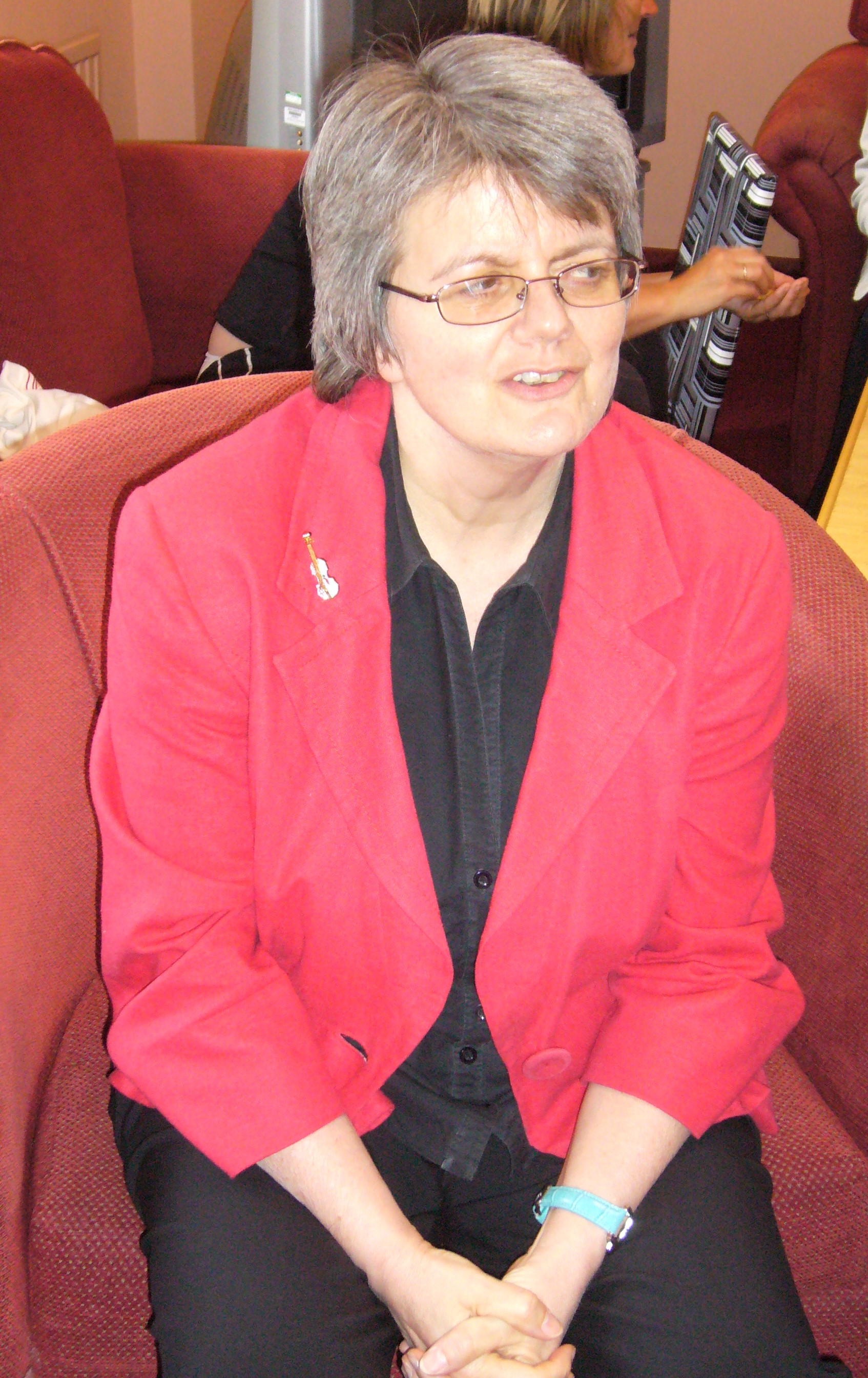 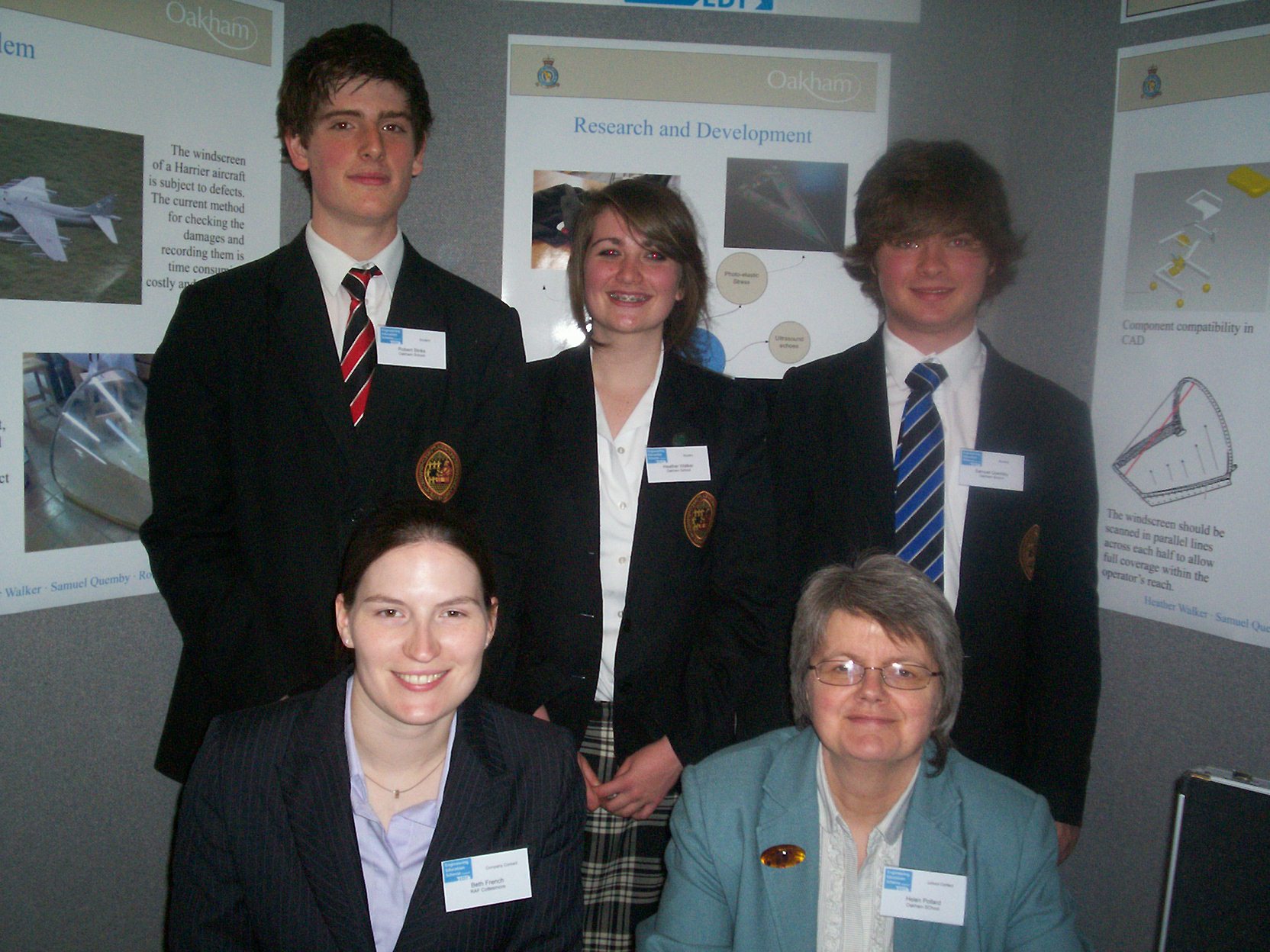 History of Physics at Oakham School

Under the headmastership of Edward Vere-Hodge (1879-1902), boys were taught “practical Chemistry and Physics” and the first science laboratories were improvised. This was possibly thanks to a parliamentary grant for National Education in Technical Education. Alongside a classical education, a technical education included the teaching of Physics, Chemistry, Mechanics, Art and Agriculture, amongst other subjects of any practical use.

His successor, Walter Lee Sargant (1902-1929), is remembered as “the pioneer of Science teaching at Oakham”. In the 1903 school prospectus, we learn that First and Second Form were taught “Nature study”; Third and Fourth Form studied Elementary Science; and Science was optional for Fifth and Sixth Form and it was not taught to boys preparing for classical scholarships. In 1914 Sargant referred to a new scheme for developing the scientific side of the curriculum by making the basis of the scientific teaching more mathematical and mechanical, to conform with the Modern School Programme. In 1920/1921 he instituted a science sixth form, running parallel to the classical sixth form. A year later, he also split the fifth form between science and classical. However, Physics, Chemistry and Biology were not yet taught as complete separate subjects.

On Speech Day in 1903, Headmaster Walter Lee Sargant announced that a new Physics laboratory would be added, following the recommendations of the Inspectors of School. A year later, the new Science buildings were erected on what is now Chapel Close. They officially opened at the start of the Winter term, 1904. They included a practical physics laboratory and a physics lecture-room was added in 1909. In 1912, Mr W.P. Beale presented a spectroscope and other instruments to the school.

After the acquisition of Wharflands and its conversion into a boarding house, the stables were converted into classrooms and laboratories. On the south side of the stables, on the first floor, there was a lecture room with a preparation room and an elementary physical laboratory. The advanced laboratory was built on the ground floor.

Throughout the 1950s, the number of boys taking courses in Science increased and it became necessary to modernise the school laboratories. In 1957 a plan was drafted. A new block was to be built on the East side of the existing Science rooms, on the site of the Deanscroft vegetable garden. The new block would include on the upper floor: a large Elementary Physics laboratory, a Physics lecture room, a store room, a staff room, a workshop and preparation rooms, a Sixth Form Physics laboratory and a Science library. Rooms for Chemistry and Biology would be on the ground floor. The construction started in the 1957 summer holidays. The school had received a grant from the Industrial Fund for the Advancement of Scientific Education in Schools and parents, Old Boys and staff donated the rest of the required sum. The new block, named the “Sargant Laboratories” after Walter Lee Sargant, were opened on Saturday 16th May 1959. 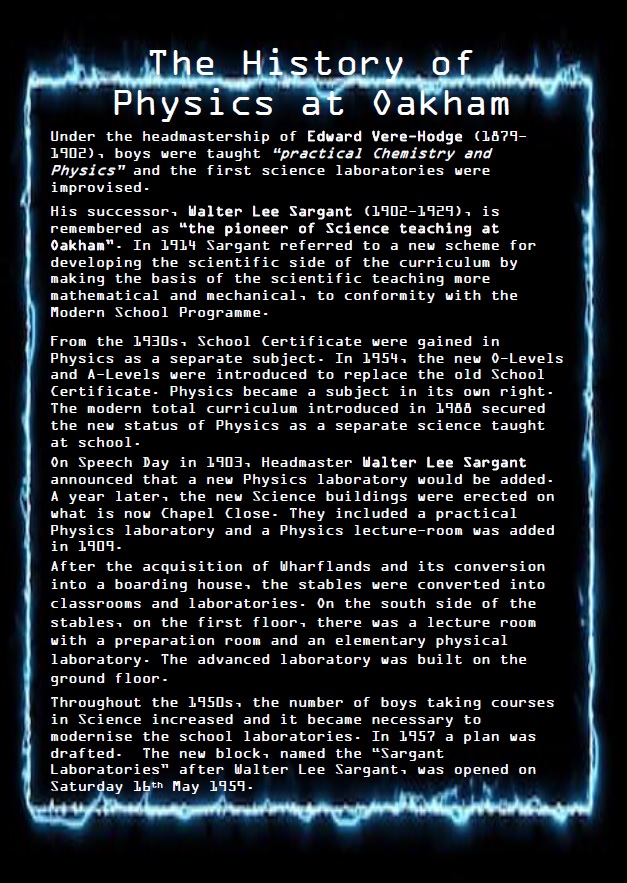 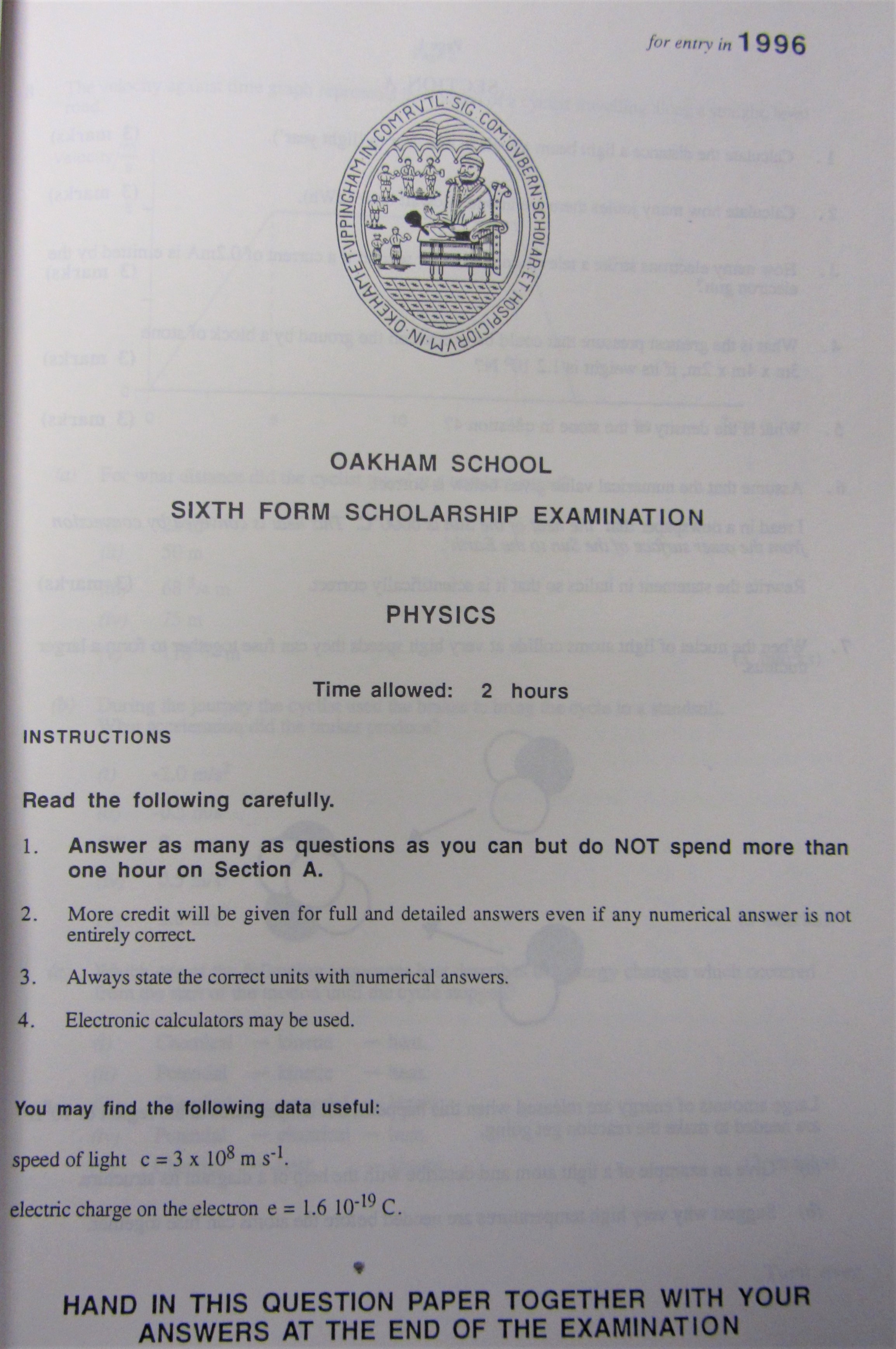 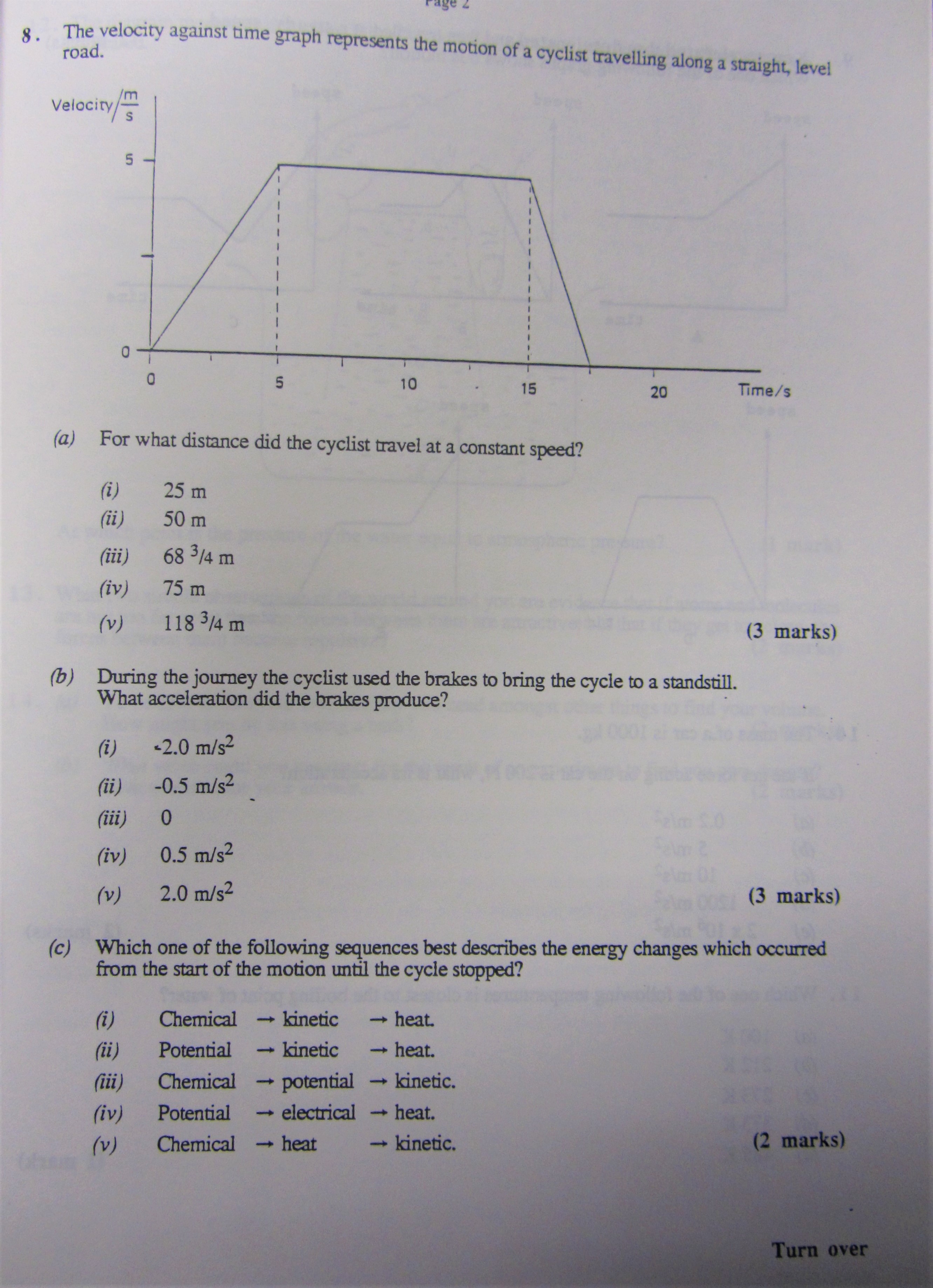 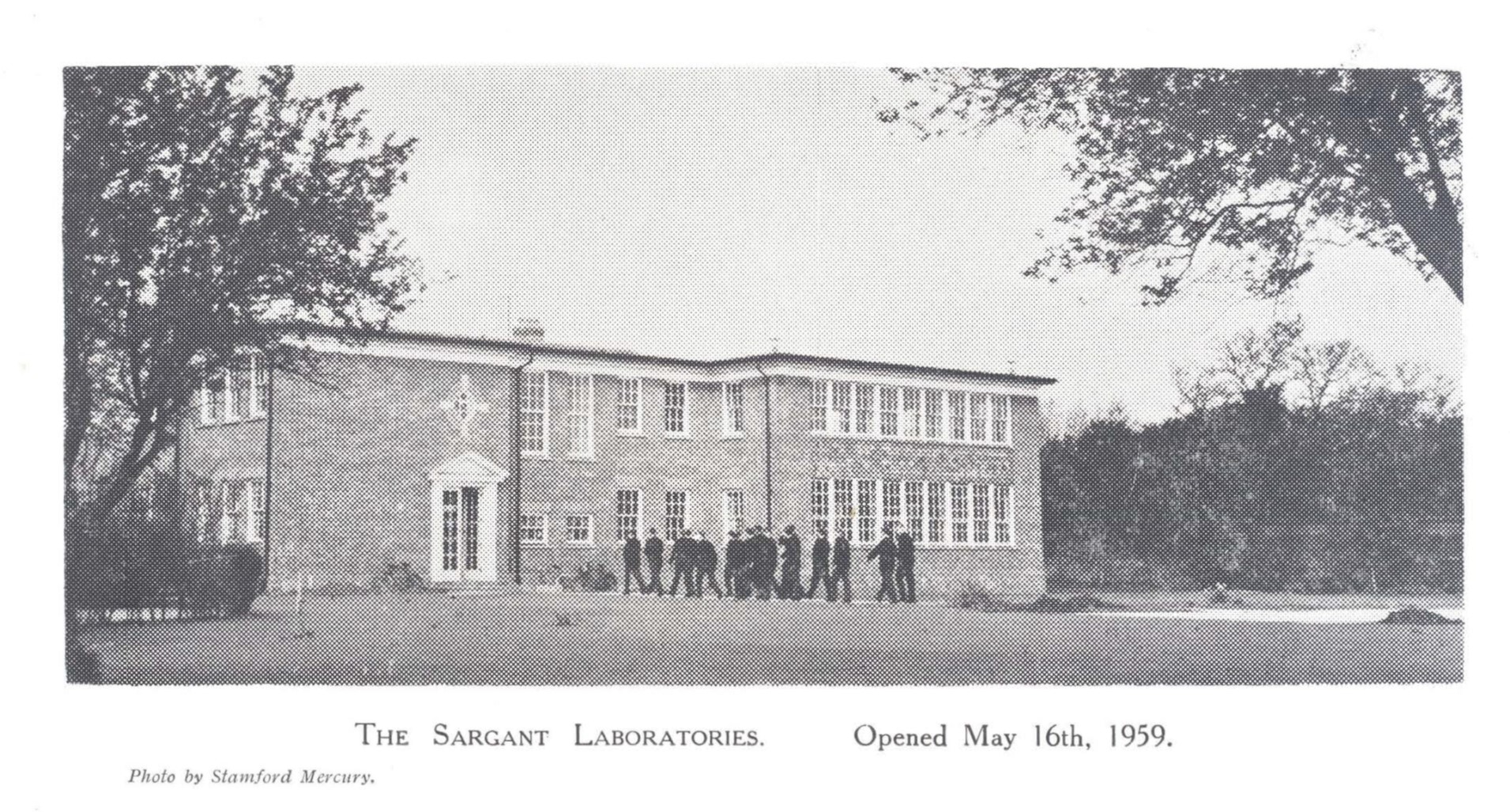 The first mention of a society connected to physics was the Astronomy Society in Spring 1974. Since then, a physics society has become a popular club, exploring subjects not covered in lessons. Trips organised by the society have included Jodrell Bank Radio Telescope Centre and the London Planetarium in 1987, and the SERC Rutherford-Appleton Laboratory near Oxford in 1992. Additionally, the society has been extremely fortunate to have attracted some of the best physicists to come to speak to pupils at the school. In 1991, Dr Isenberg gave a lecture on earthquakes and nuclear explosions while Dr Valerie Gibson discussed the new discovery of the ‘top quark’. The society has regular meetings and discusses the latest scientific theories and finds.

There have been many trips run by the physics department over the years. Pupils have had opportunities to go to places such as CERN, Cambridge, and the Leicester Space Centre.

The first Physics trip recorded was in 1936, when a party of the Science Sixth formers went to South Kensington, London to visit the British Industries’ Fair.

On 6th February 1957, the Science Sixth form attended a Faraday Lecture at the De Montfort Hall in Leicester. Dr T.E. Allibone, an electrical physicist, spoke on the topic of “Nuclear Energy in the service of Man”.

A 2003 fourth form trip to the National Space Centre saw pupils explore the University of Leicester’s connections with the Beagle 2 project.

By far one of the most exciting trips came in 2008 when five sixth form pupils were given the chance to visits CERN in Geneva. Students saw the detectors that gather information about what exactly happens when the particles collide and were given lectures on what is being researched at the facility. 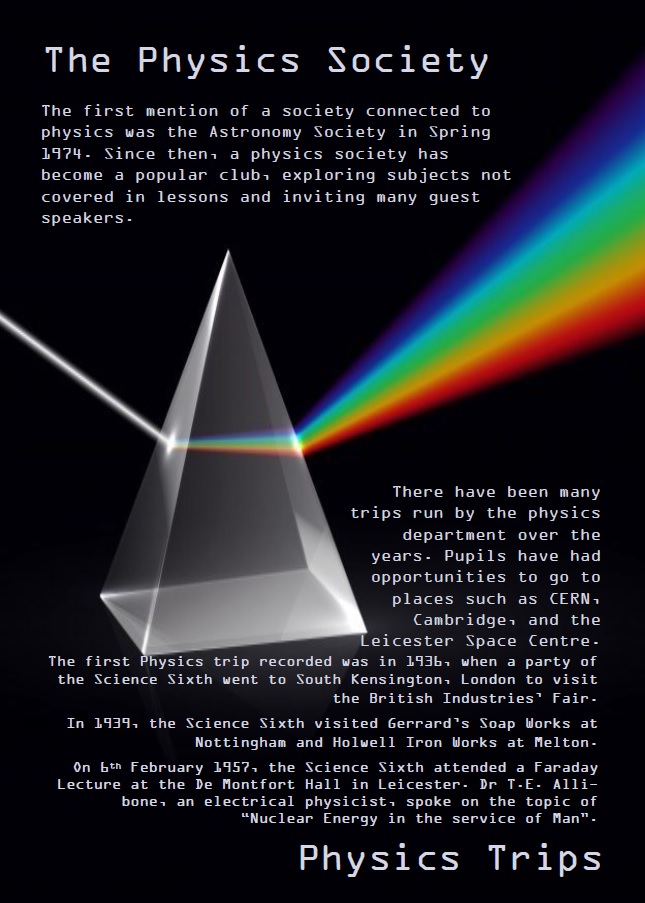 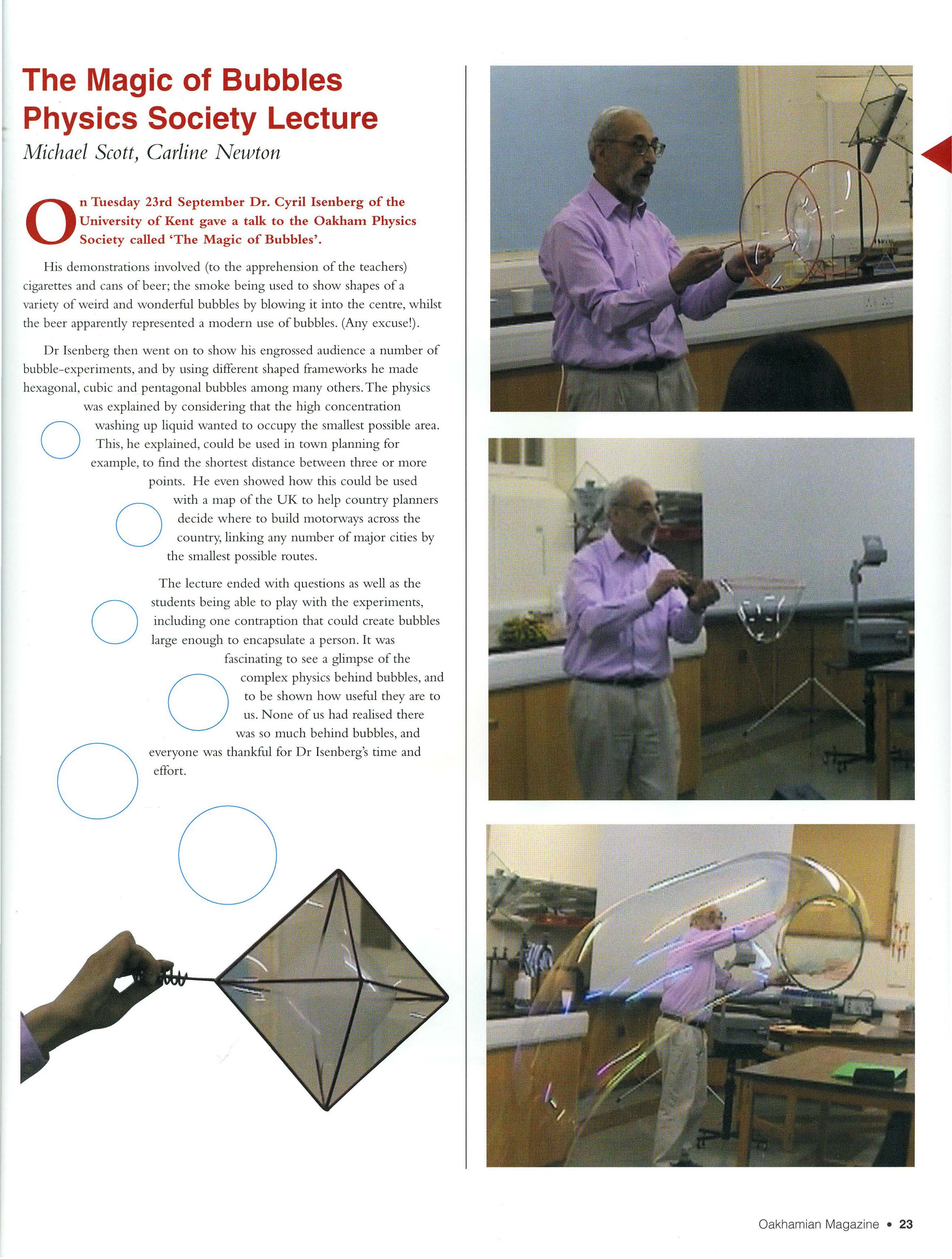 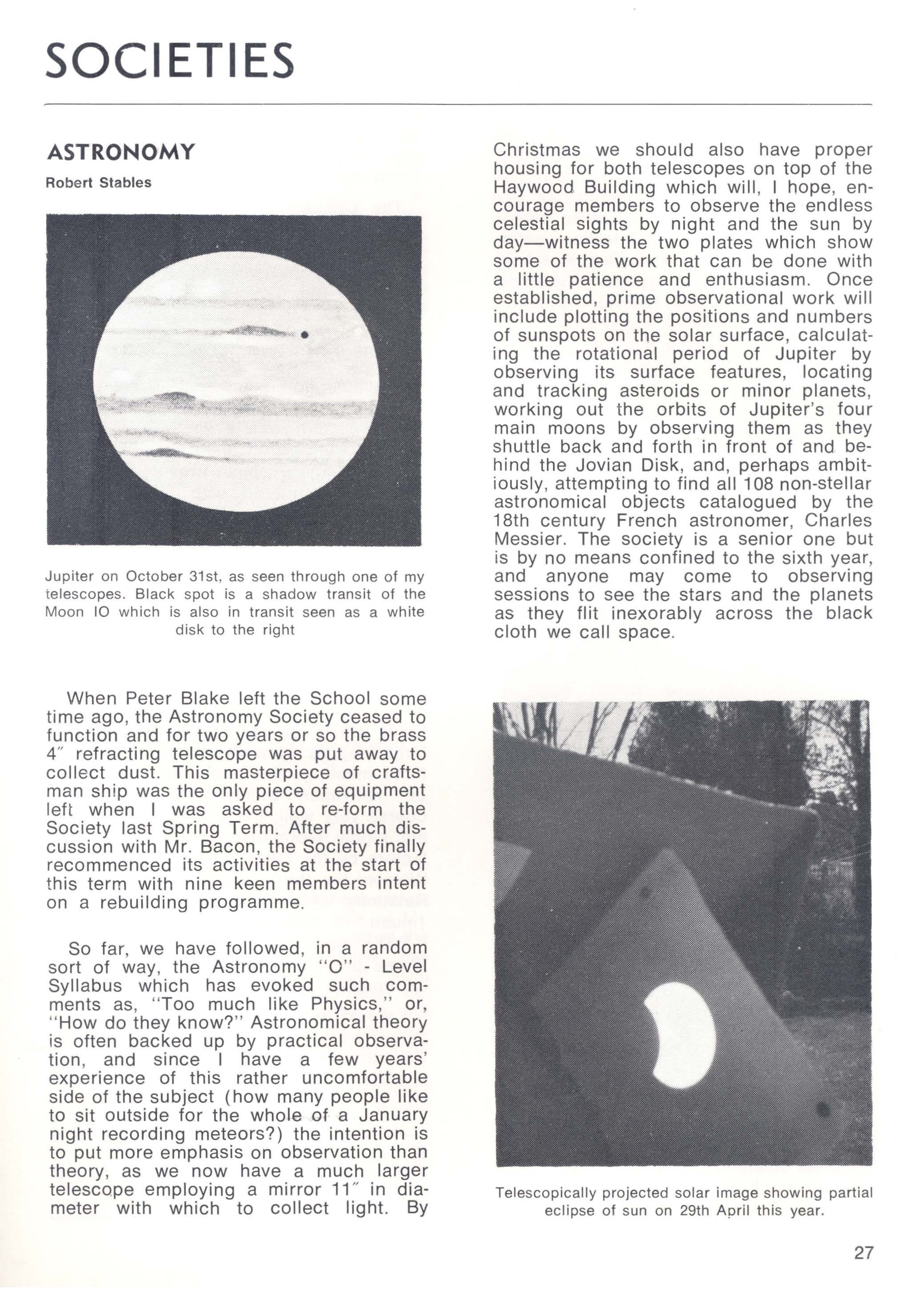 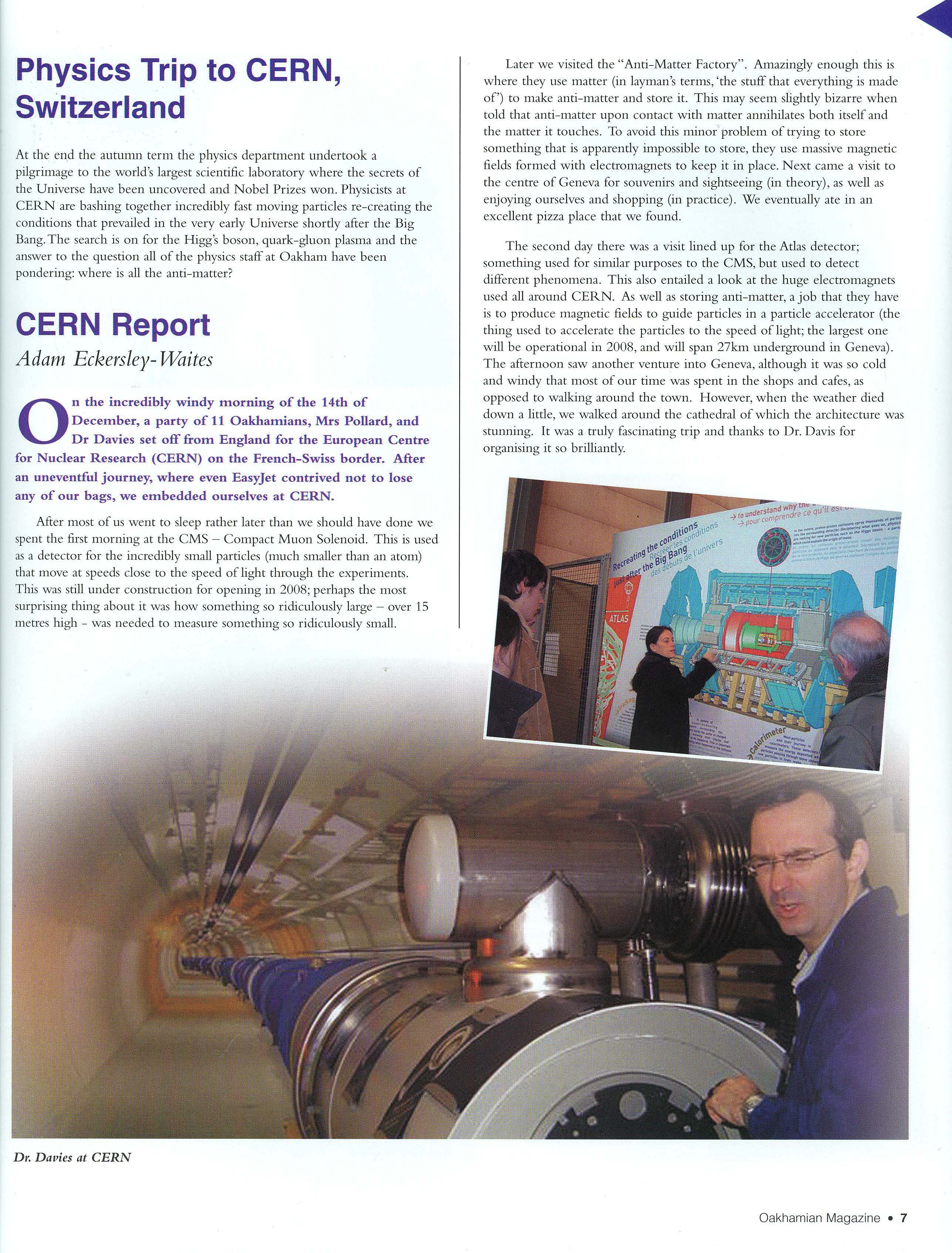 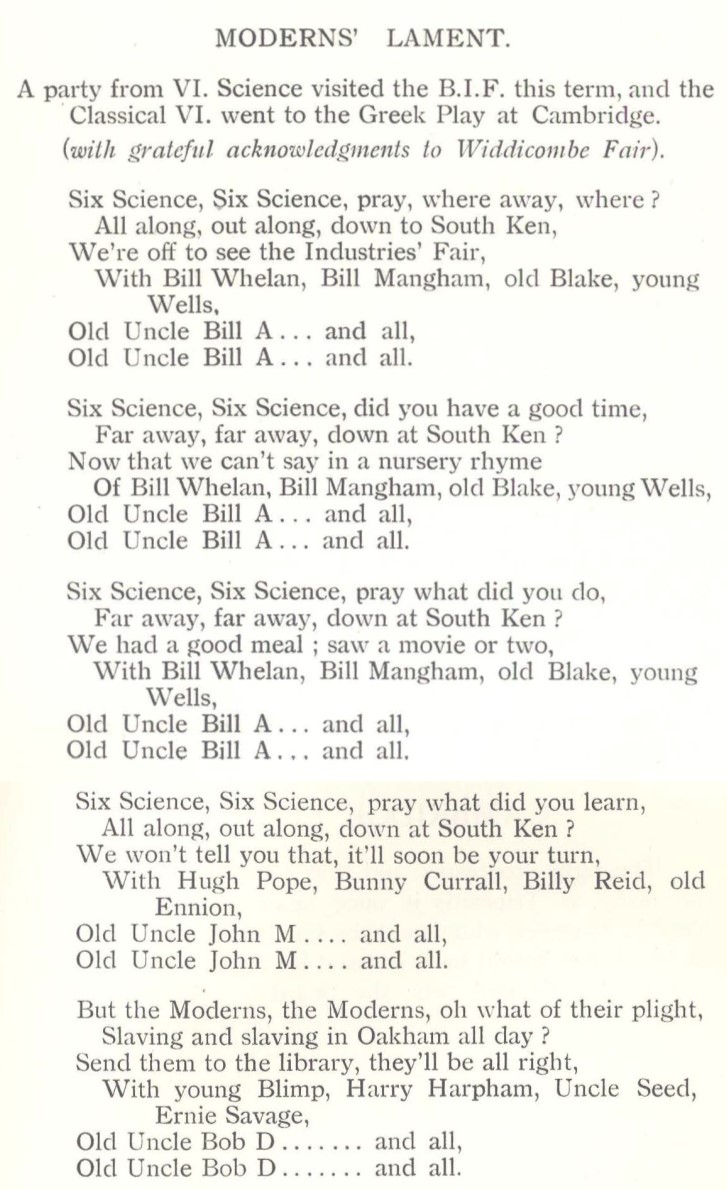 Oakham School pupils are offered many opportunities to take part in national physics competitions and talks with guest speakers.

A Science Prize was awarded for the first time to a member of the Sixth Form in 1891.

In 2010, Professor Brian Foster spoke to upper school pupils about Albert Einstein and his work on understanding particle physics. This talk ended rather unexpectedly with the professor playing a duet with concert violinist Jack Liebeck.

Professor Jocelyn Bell-Burnell visited in 2006 enthralling pupils with a talk about the universe and its future. The professor speculated on the possibility of the universe shrinking and what dark matter is.  Bell-Burnell had won numerous awards for her scientific work including a CBE and helping her PhD supervisors with a Nobel Prize winning project on the discovery of Pulsars.

Other notable guests include astronaut and first Canadian to walk in space, Chris Hadfield and scientist at the national physical laboratory, Michael de Podesta.

In 2005, a team of sixth formers won the regional Institute of Physics competition with a presentation on Circular motion.  Various experiments they performed included the motion of a conker on a string, a marble in a loop the loop track and spinning a bucket of water. They went on to the national finals held in Birmingham. The team was made up of Chris Lyon, Alex Mapletoft, Jonty Marsh, Joe Knowles.

In 2015 OO Bob Cliffe won silver at the international Olympiad for Astronomy and Astrophysics (held in Indonesia). To earn a silver medal, Bob needed to score between 78% and 90%. The UK team was eventually ranked 9th and Bob was ranked 30th out of the 120 students who took part. Bob was one of three students to be picked from the Physics Olympiad Training Camp at the University of Oxford – a camp where only the top 15 physics students in the country were chosen to go.

The two photographs that we have on display show pupils taking part in two national physics challenges. One is the 1999 Physics Challenge, organised by the Royal Society. Dan Shouler and David Shanks won gold and silver respectively. The second is the 1995 British Physics Olympiad and Physics Challenge Presentation at the Royal Society on the 27th April. OO R. Van de Hoff is pictured alongside M. Vinal, Dr. Cyrill Isenberg, Buy Bagnall, J. Bound, and G. Holmes. 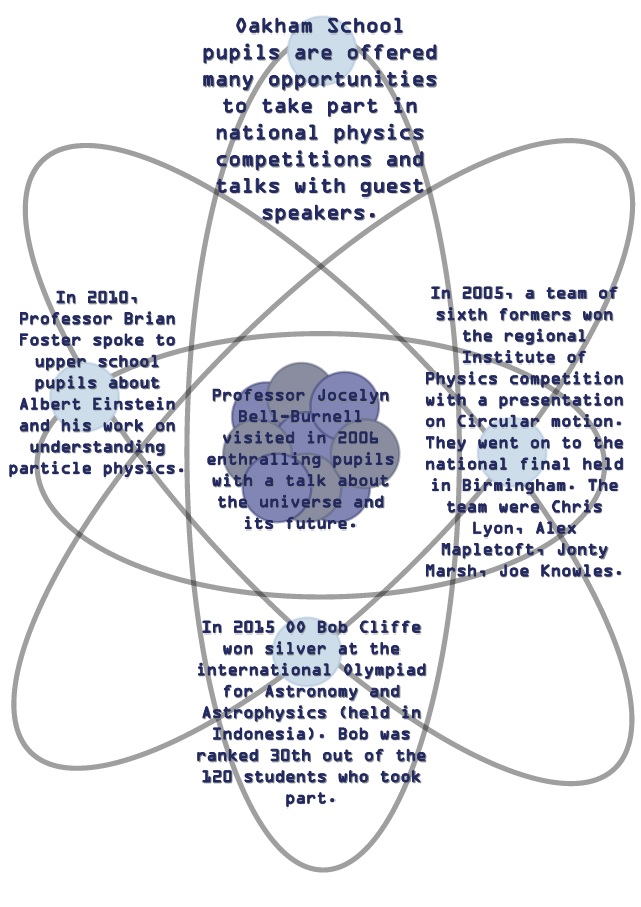 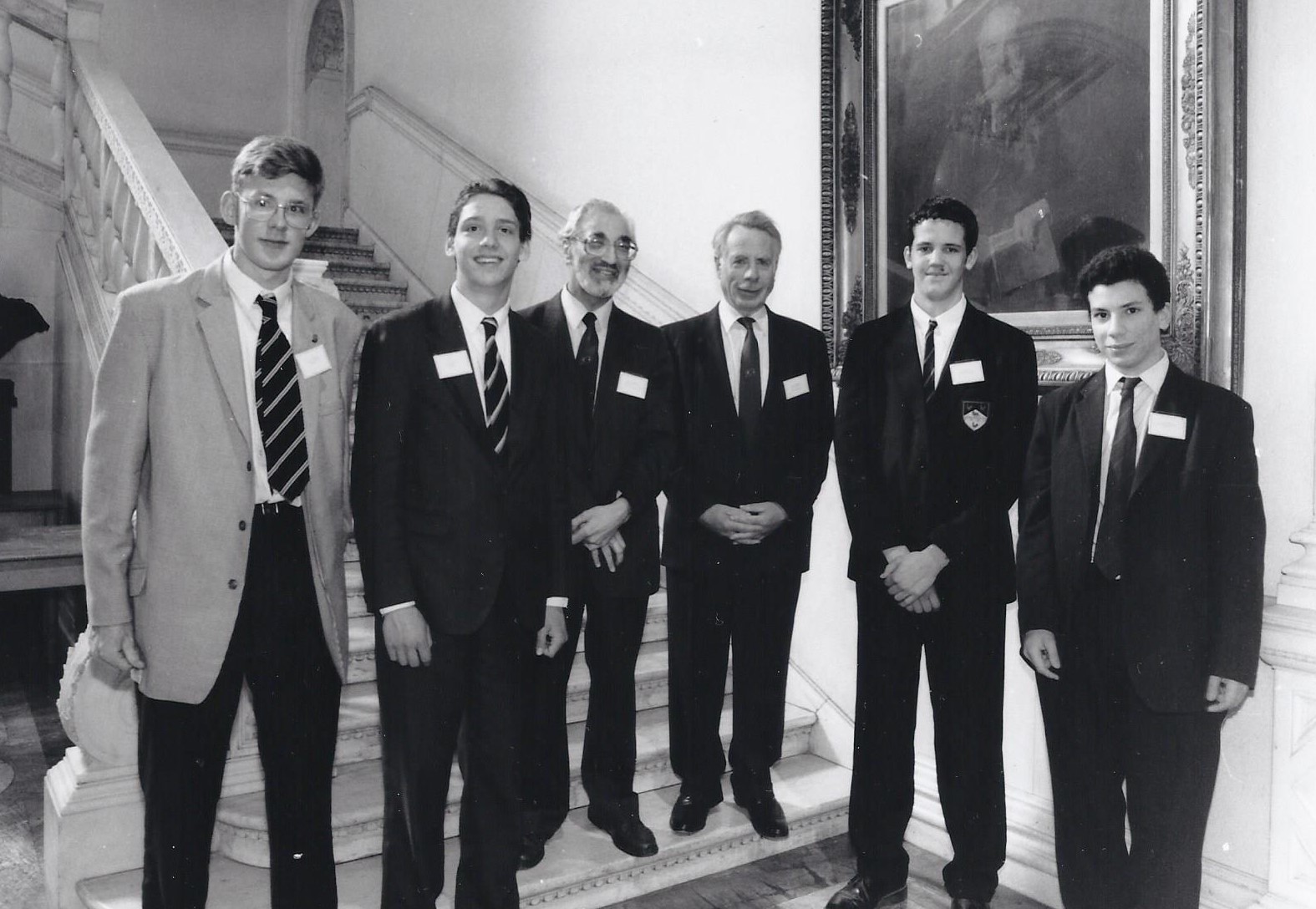 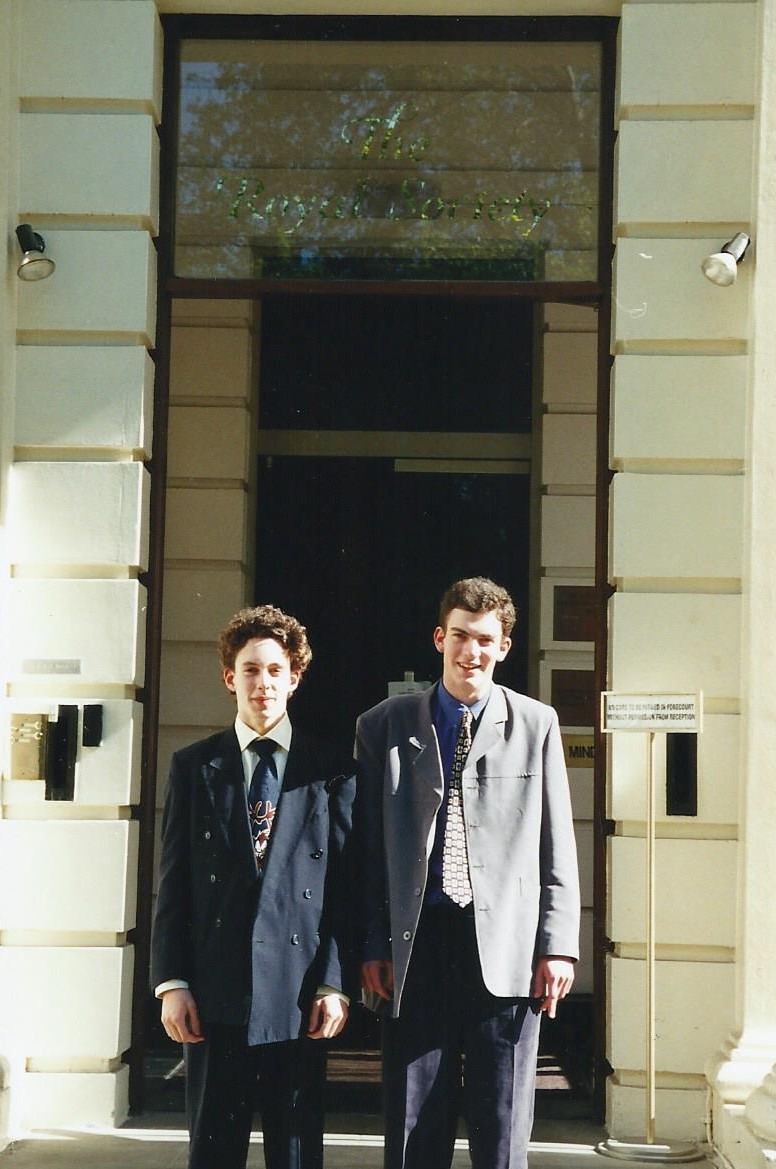 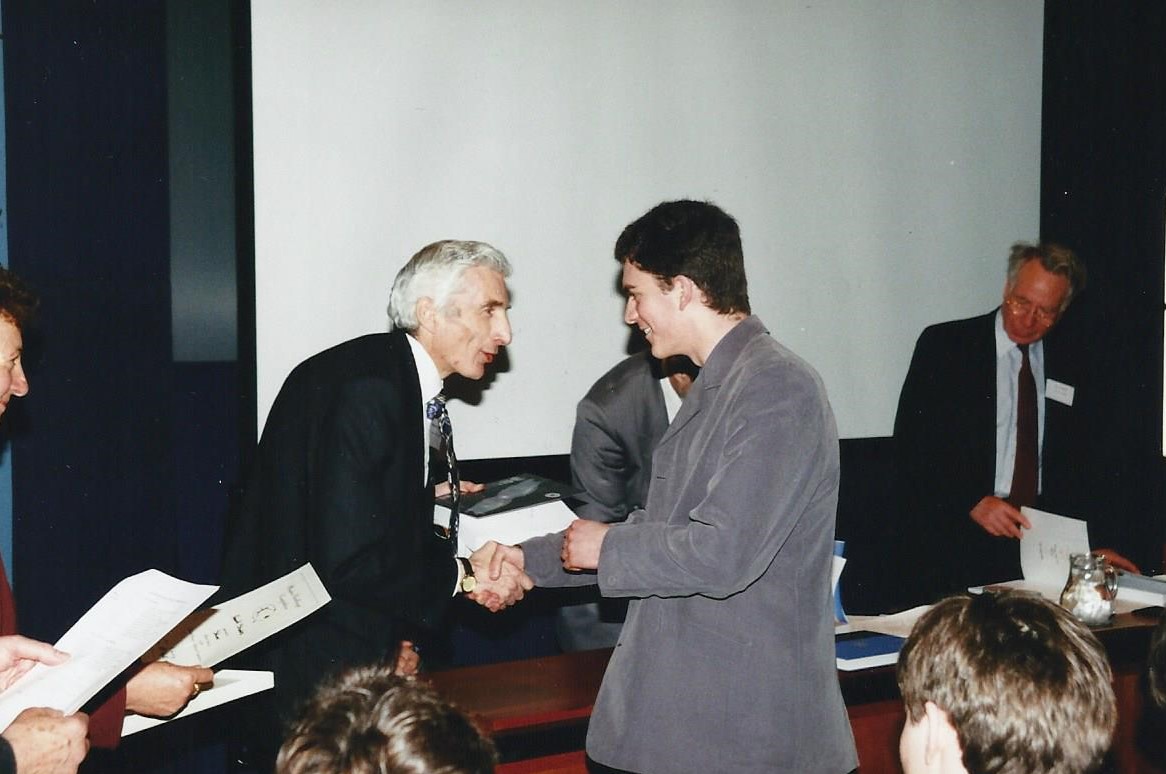 We are very proud to have had many pupils and staff members achieve extraordinary things in the realm of physics.

Dr Andy Davies was a physics teacher at Oakham and was won the prestigious Institute of Physics Teacher Award in 2006. A testament to his superb teaching is that his own pupils nominated him for the award. A pupil described how he was “one of the most skilful teachers that I was ever likely to meet” and that he was dedicated to all students “willing to give [them] extra lessons outside the timetable [and] run lectures for interested students”.

Edward Gordon Peake – Edward received Distinction in Chemistry and Physics in the Oxford and Cambridge Board Higher Certificates in 1893 and 1894. In 1894 he gained a Science Scholarship and a Johnson Exhibition at Clare College, Cambridge. In 1896 he was awarded a College Prize for Natural Science and in 1898 he gained First Class in the Science Tripos at Clare.

Francis Nelson Blois Johnson became a lecturer in Mathematics and Physics at the Central Polytechnic after the Second World War.

Captain William Norman Saxby, O.B.E., was elected a Graduate of the Institute of Physics in 1950. In 1991, he was honoured by the Society for Radiological Protection.

John Claude Lisle was awarded a Scott Scholarship in Physics at Keble College, Oxford in 1954. It was renewed in 1955 for another year. 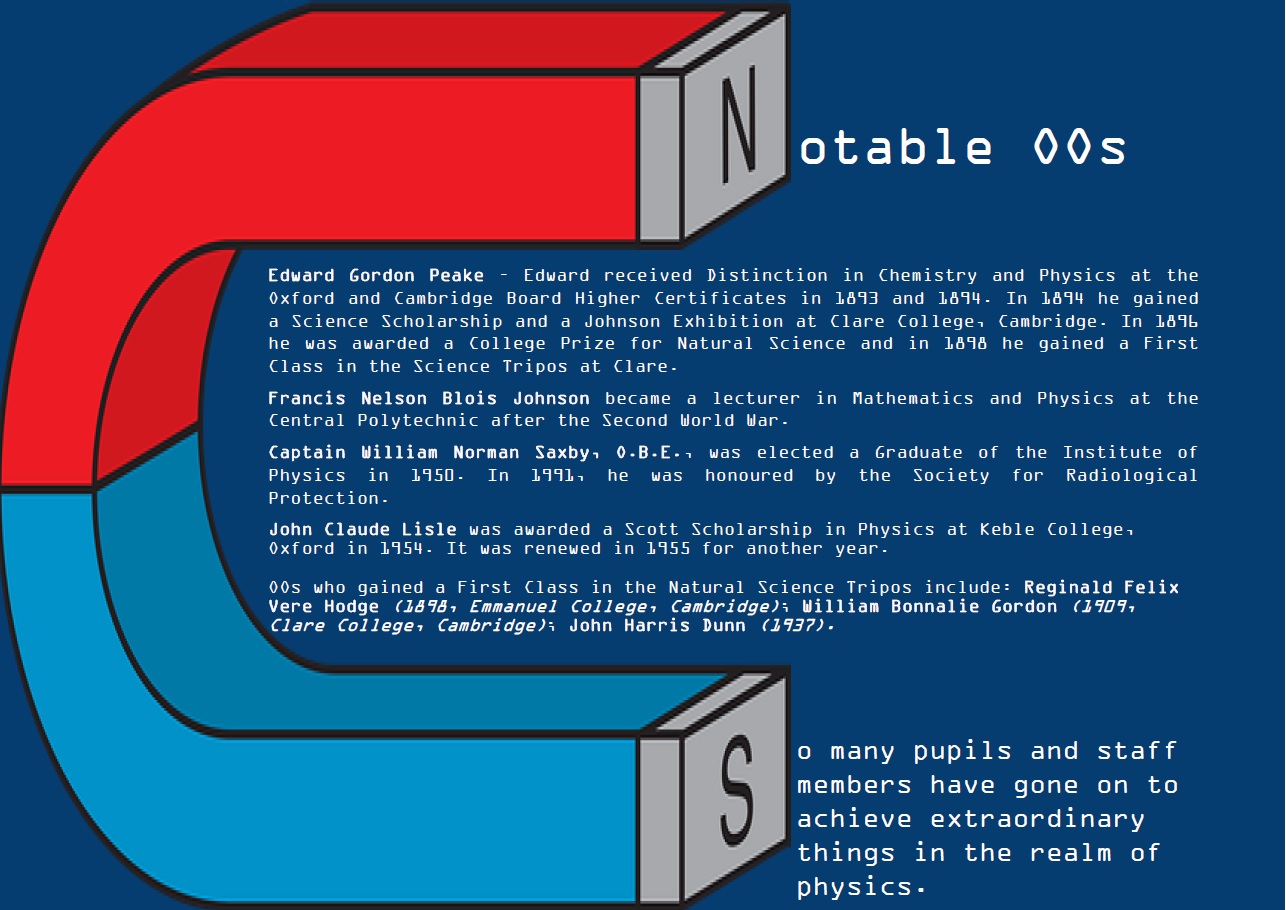 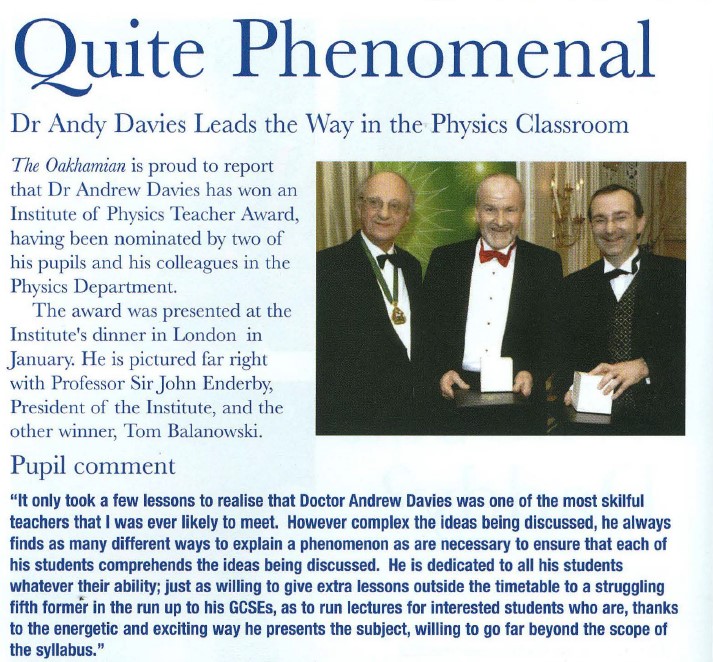 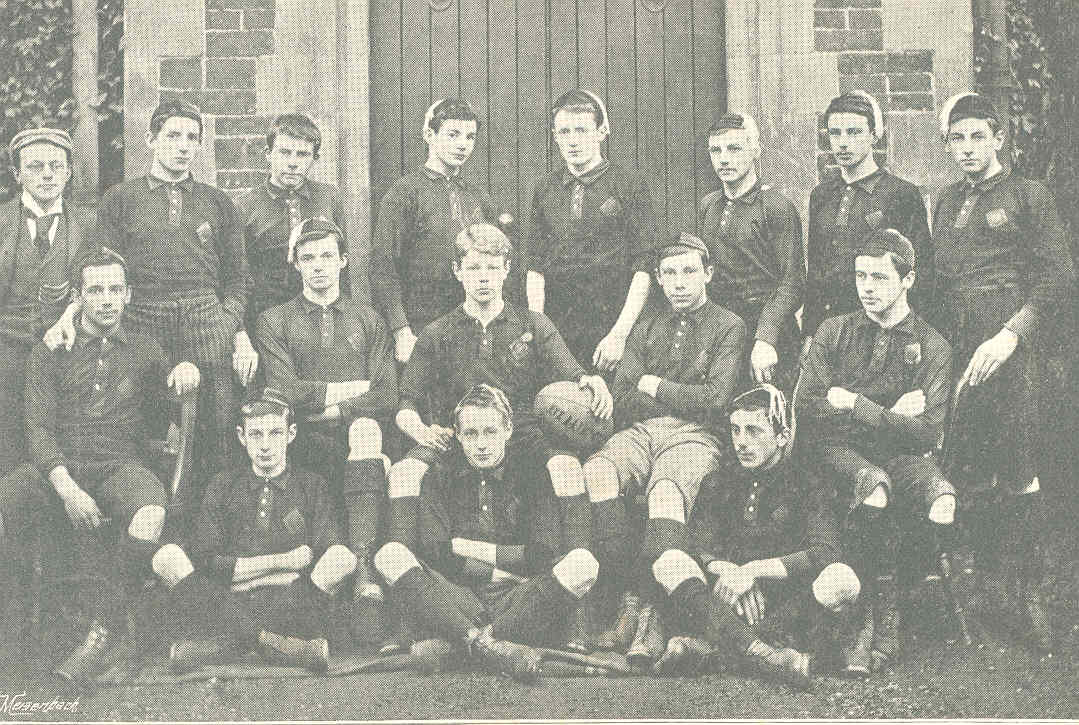