The Crimean War was fought mainly on the Crimean Peninsula, south of modern day Ukraine, on the Black Sea. The British, French and Ottoman Empire fought the Russians due to tensions between powers in the Middle East and Russian interference in religious matters within the Ottoman Empire. Russia had wanted to have the same privileges that France had regarding protecting Christian sites within the empire’s control.

The first hostilities occurred when Russia invaded Moldavia and Wallachia (now Romania). The Ottoman Empire asked for British and French assistance which was given. The first allied troops landed in the Crimea in September 1854. British public opinion was initially behind the war prompting the government to attack the Russian naval base of Sevastopol. 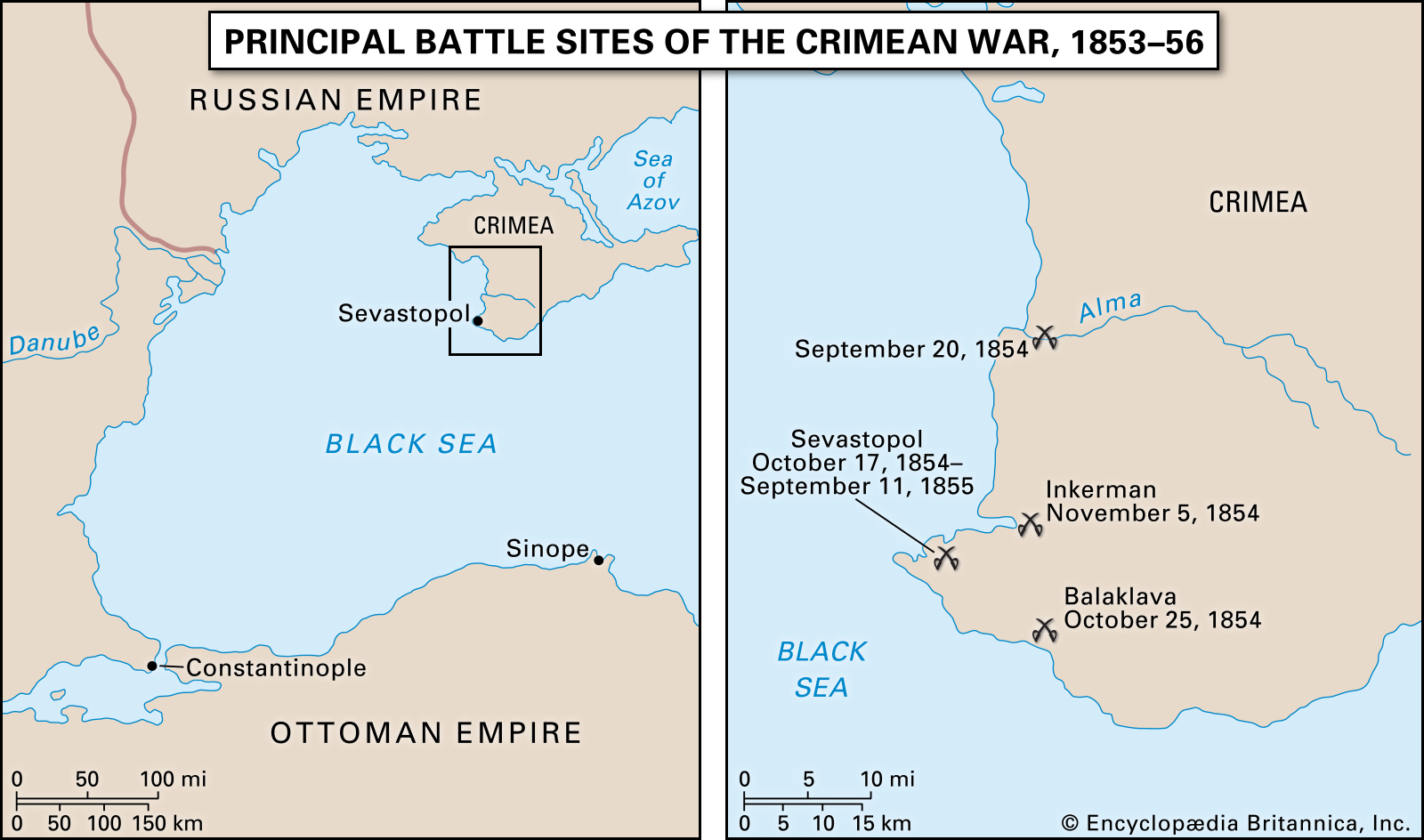 Battle sites in the Crimea, courtesy of Encyclopedia Britannica.

Sevastopol is on the south west of the Crimean Island. The capture of this base became one of the key objectives for the British during the war. The Siege of Sevastopol began on the 17th October 1854 and lasted until the 11th September 1855. Over 50,000 British and French troops took part. The British and French forces were hampered by the lack of heavy artillery power on their side. The base was eventually captured eleven months later after the French had claimed the Malakoff redoubt (8th September 1855) and the Russians subsequently evacuated the fortress of Sevastopol. It was the loss of this fortress that helped push Russia towards peace.

One of the biggest battles in the conflict was the Battle of Balaklava. The Russian army had mainly been stationed to the east of Sevastopol. They decided to move towards the British camp at Balaklava on the 25th October. This led to a large battle which is perhaps more famous for containing the charge of the light brigade. This was a British military disaster which resulted in the lost on 247 men. Lord Raglan ordered an “advance rapidly to the front, follow the enemy and try to prevent the enemy carrying away the guns”. He had the benefit of having a high vantage point and could see the battlefield clearly. Lord Lucan, the cavalry commander, and Lord Cardigan, the commander of the Light Brigade, had a more obscured view of the battlefield and could only see the Russian guns at one end of the valley. Cardigan directed his attack at these guns, unaware that there was a unit of Russian artillery on a ridge above them. Only a French cavalry charge prevented the brigade from being wiped out.

The valley where the Charge of the Light Brigade happened.

Peace was brought about when Austria had threatened to join the war on the British and French side. Knowing that they could not compete with this large force, Russia started to negotiate peace terms which were finalised in the Treaty of Paris on the 30th March 1856. Russia surrendered any chance of protecting Christian sites in the Ottoman Empire, along with territories such as southern Bessarabia.

Old Oakhamian who fought in the Crimean War

George was the son of Rev. J. Filed of Braybrooke Leicestershire. He attended Oakham School from 1837 to 1839. Later, he went to RMC Woolwich and became a Captain and then a General in the Royal Artillery.

George was present at the siege of Sevastopol during the Crimean War. 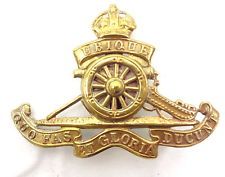 The cap badge of the Royal Artillery.