Although peace was declared in 1945, many conflicts and tensions continued on in the late 1940s to early 1950s. Germany was divided, India and Kenya were fighting for independence and tensions were rising in Palestine. Many thousands of soldiers were demobbed after the war, but the government deemed it necessary that Britain maintain a large fighting force.

Therefore, in 1947, Clement Attlee’s Labour government passed the National service Act which eventually came into force in 1949. This act required all physically fit males between the ages of 17 and 21 to complete 18 months National Service in an arm of the armed forces. Interestingly, conscripts were not drawn from men of a black or Asian background, nor were they drawn from Northern Ireland due to the civil unrest there. Women too were excluded and conscientious objectors had to go through similar trials that had taken place during the Second World War.

The Oakham School Magazine in 1952 gave a comprehensive overview to pupils about what National Service entailed.

New recruits would go through a medical and then have six weeks of training. They were issued with equipment and a uniform that often did not fit properly.

‘My battle dress blouse fitted me perfectly so the quarter-master sergeant apologised and assured me it didn’t usually happen.’

They were regularly drilled and ordered to polish their kit. But in terms of general training, this was minimal. 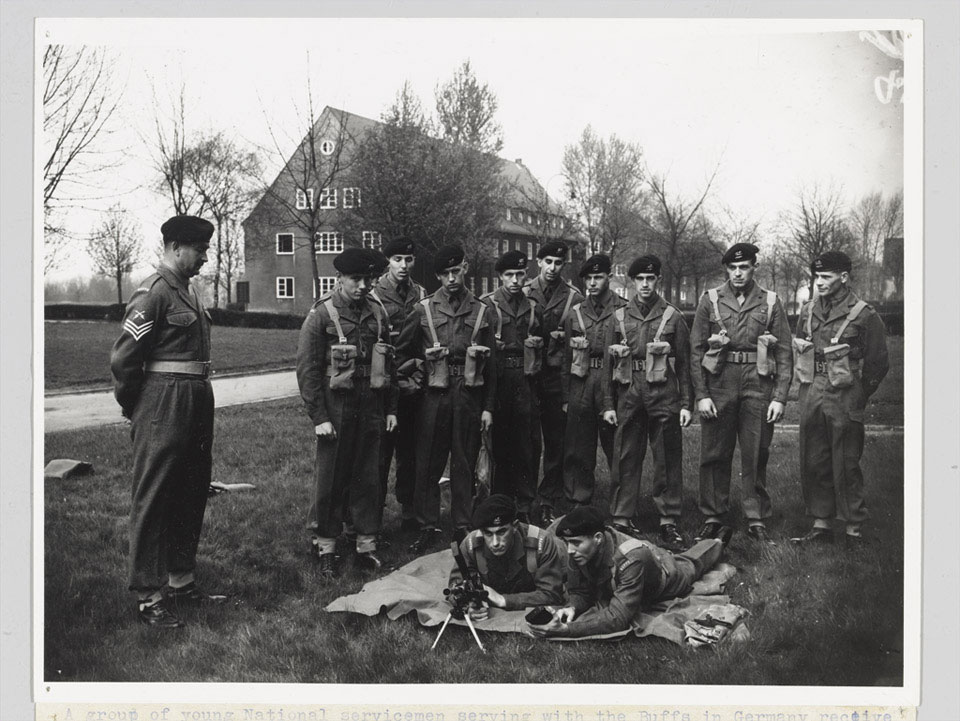 However there were opportunities for some to receive extra training in areas such communication, engineering, clerical duties and languages. This is highlighted by a letter written by a pupil to the Oakhamian Magazine in 1952. 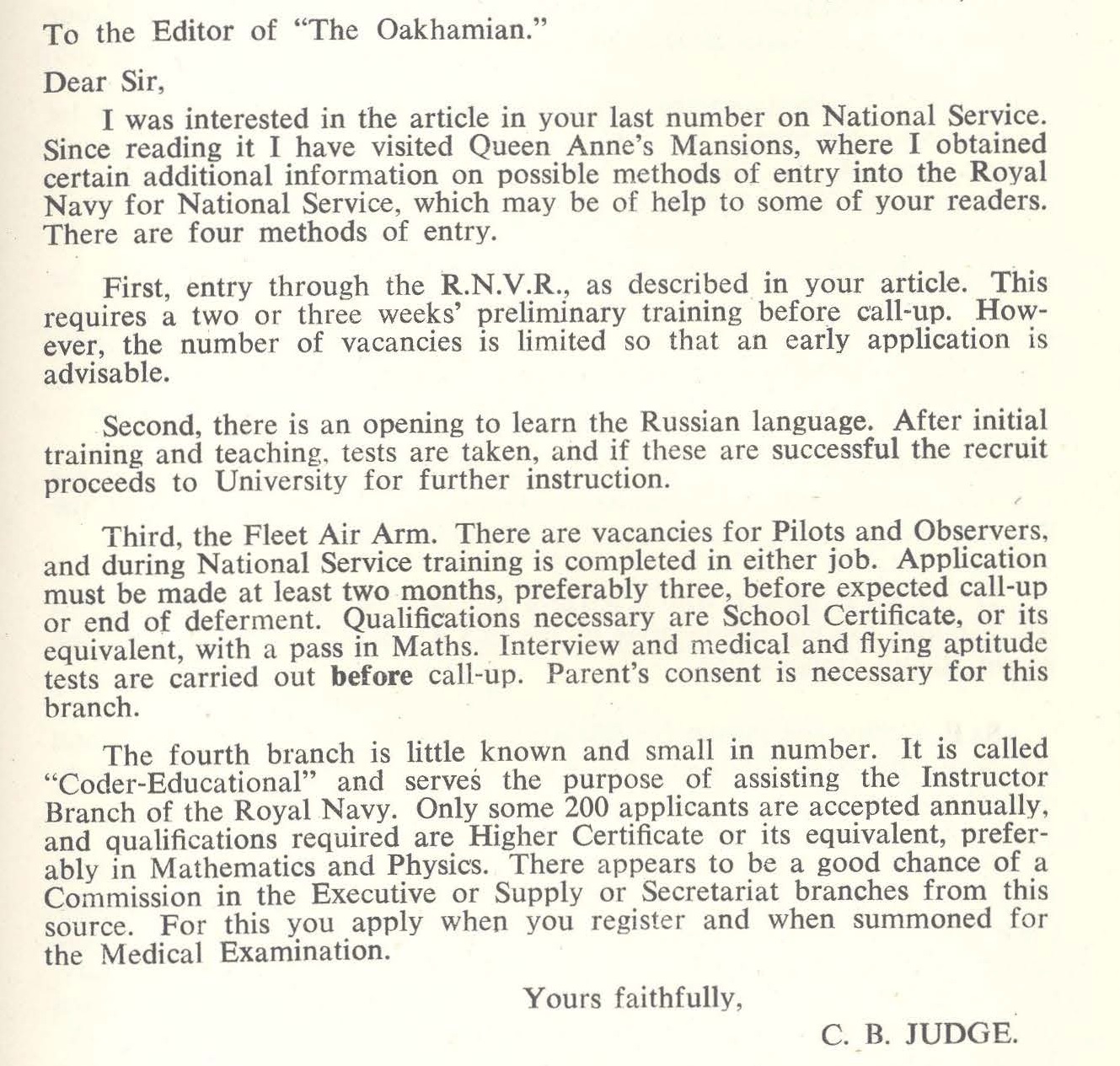 Soldiers lived in cold barracks which were often furnished with just basic facilities, let alone central heating. There were 20 men to a room with each man having a bed, steel wardrobe and a locker. They were paid 28 shillings a week in 1948 but this rose to £8 8d 8p in 1951.

After their initial service, soldiers remained on a reserve list for up to four years. They would have to spend 20 days training on three separate occasions during these years.

National servicemen were often sent overseas to serve in trouble sports. Germany and Korea were two common areas. In total between 1947 and 1963, 395 national service recruits were killed in action.

An already unpopular scheme, national service was further called into question as a result of the shambles that was the Suez Crisis in 1956. Training huge numbers of conscripts from all different backgrounds took up a lot of time and resources for the army. Furthermore, it took many working men out of the British economy at a time when they were needed.

Thus in 1960, national service was abolished (although men who had deferred their service due to studies and apprenticeships would still have to complete their duties). The last national serviceman finished his duty in May 1963. 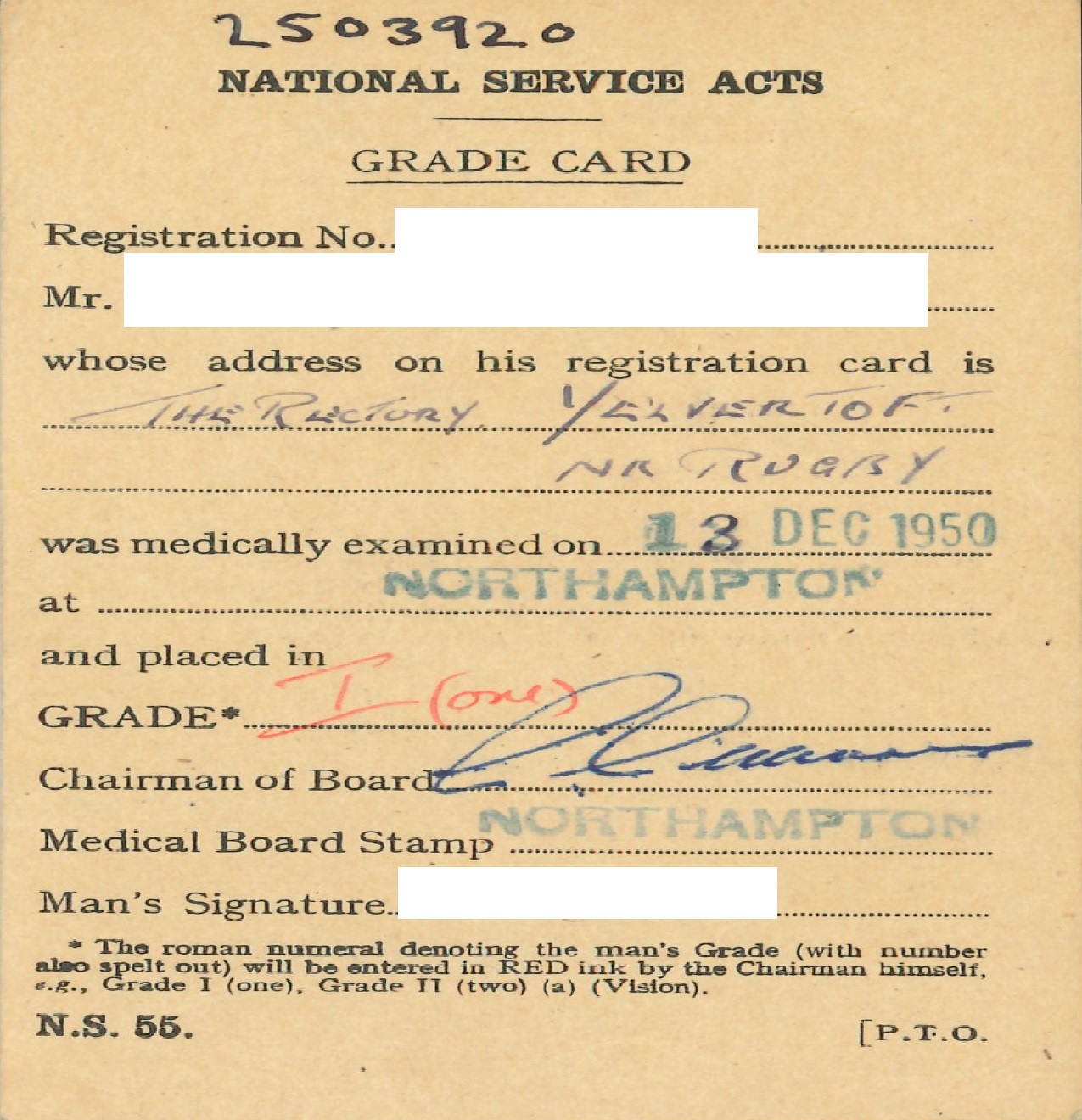 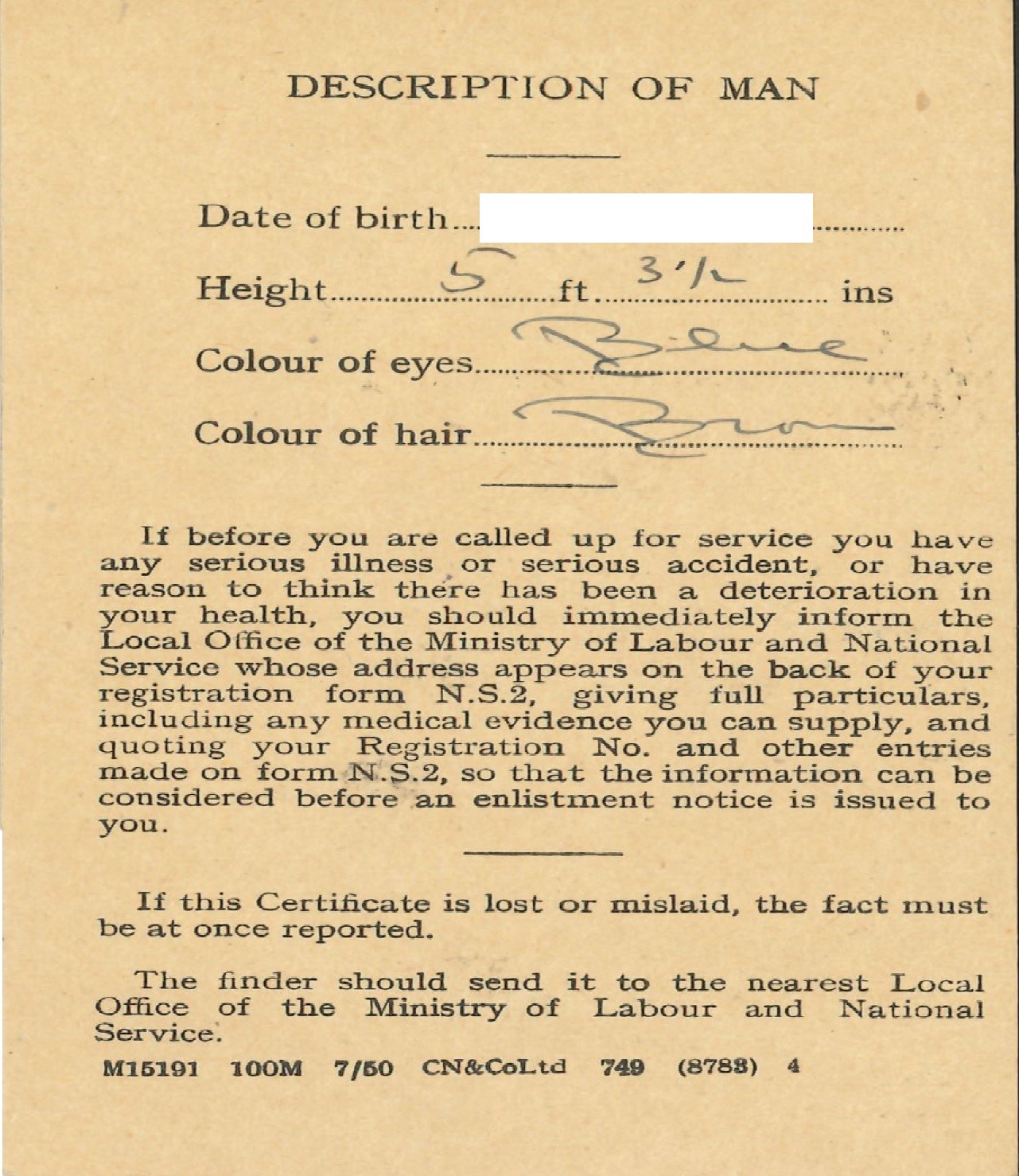 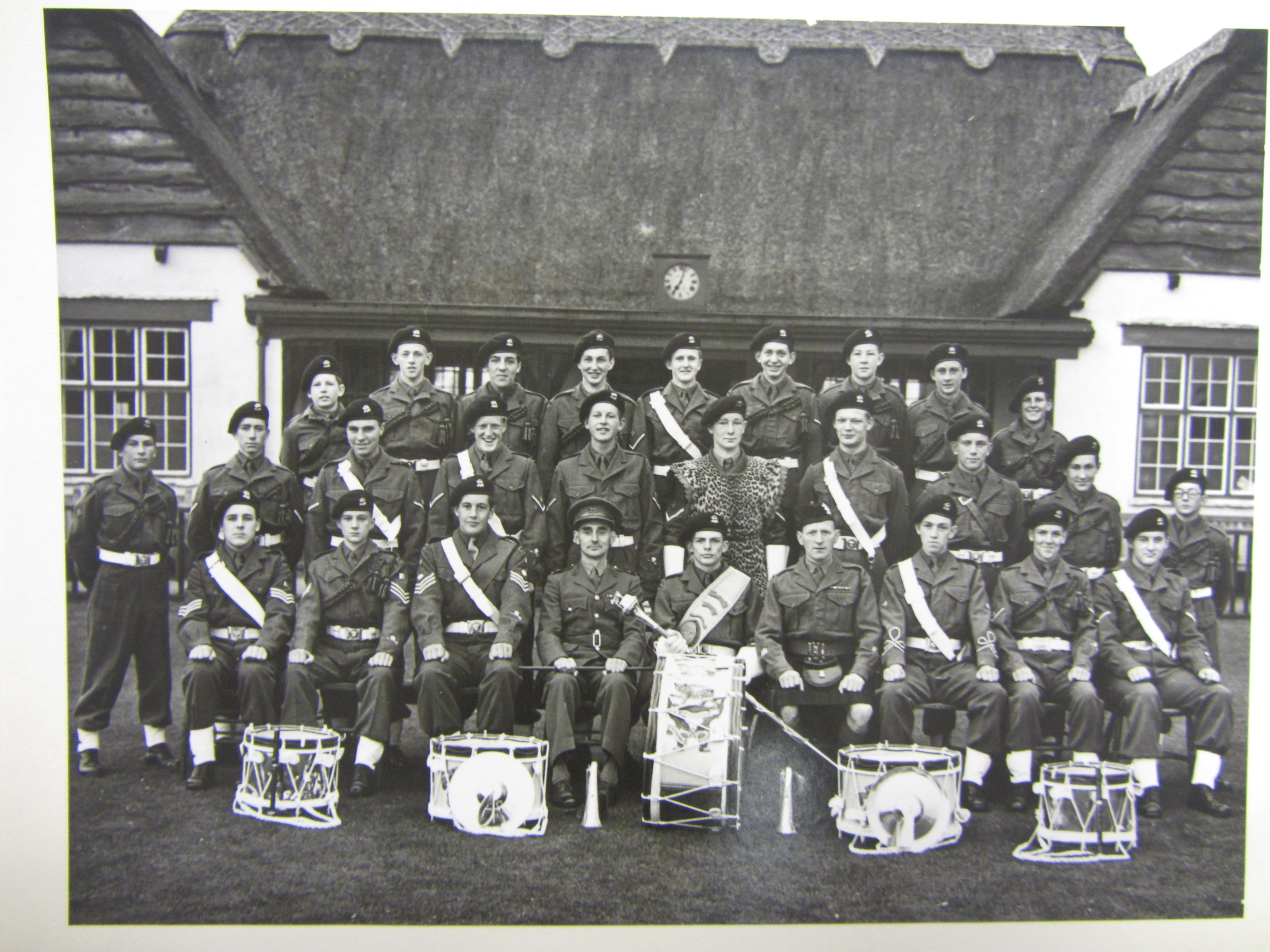 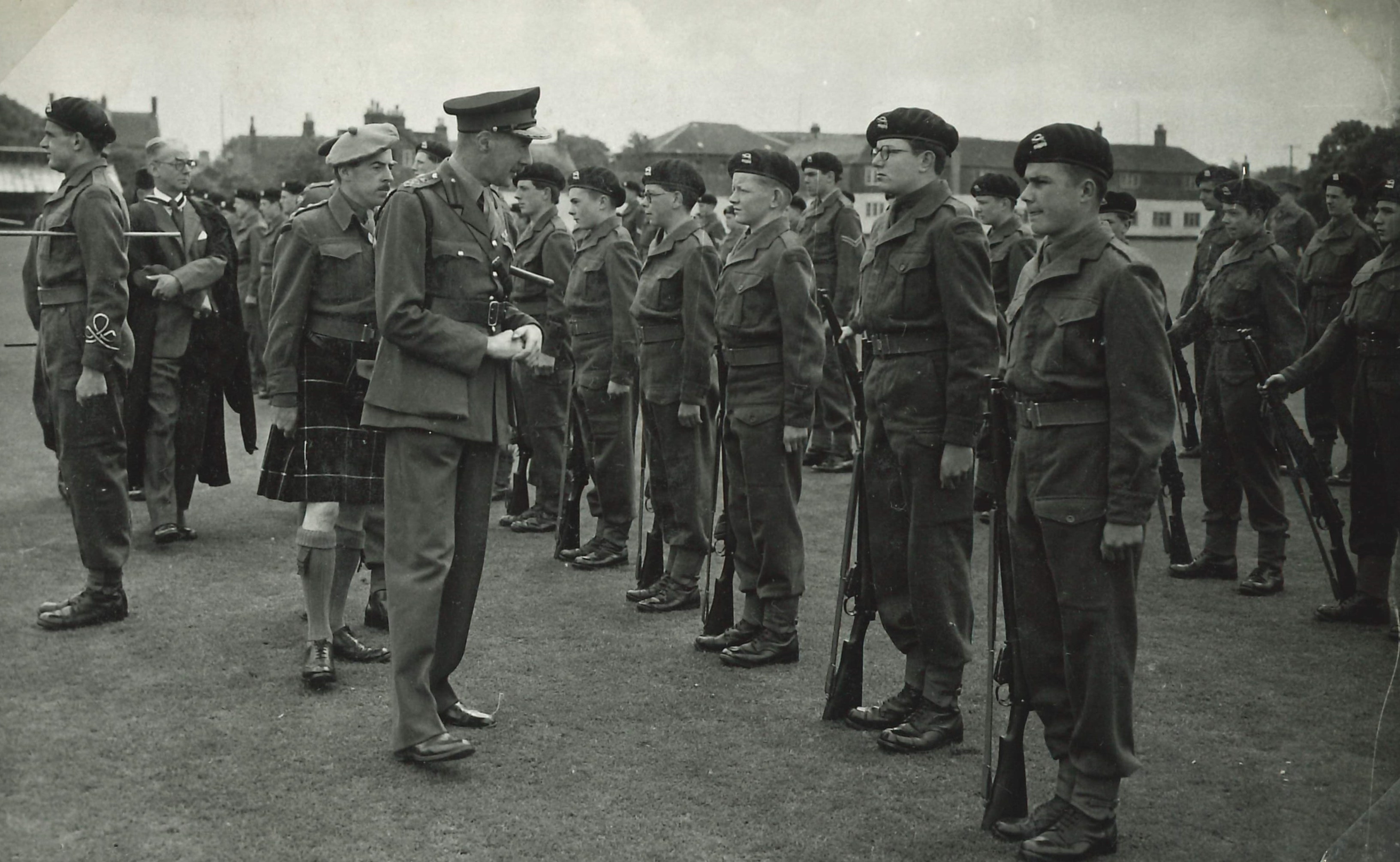 Cadets at the machine gun

A photograph of cadets practising on the machine gun at the 1954 Inspection. Oakham School Archives Collection. Item number: PHA/1/7/AB.

A photograph of CCF cadets at the Annual Inspection by Colonel Posthlewaite in 1954. Oakham School Archives Collection. Item number: PHA/1/7/AB. 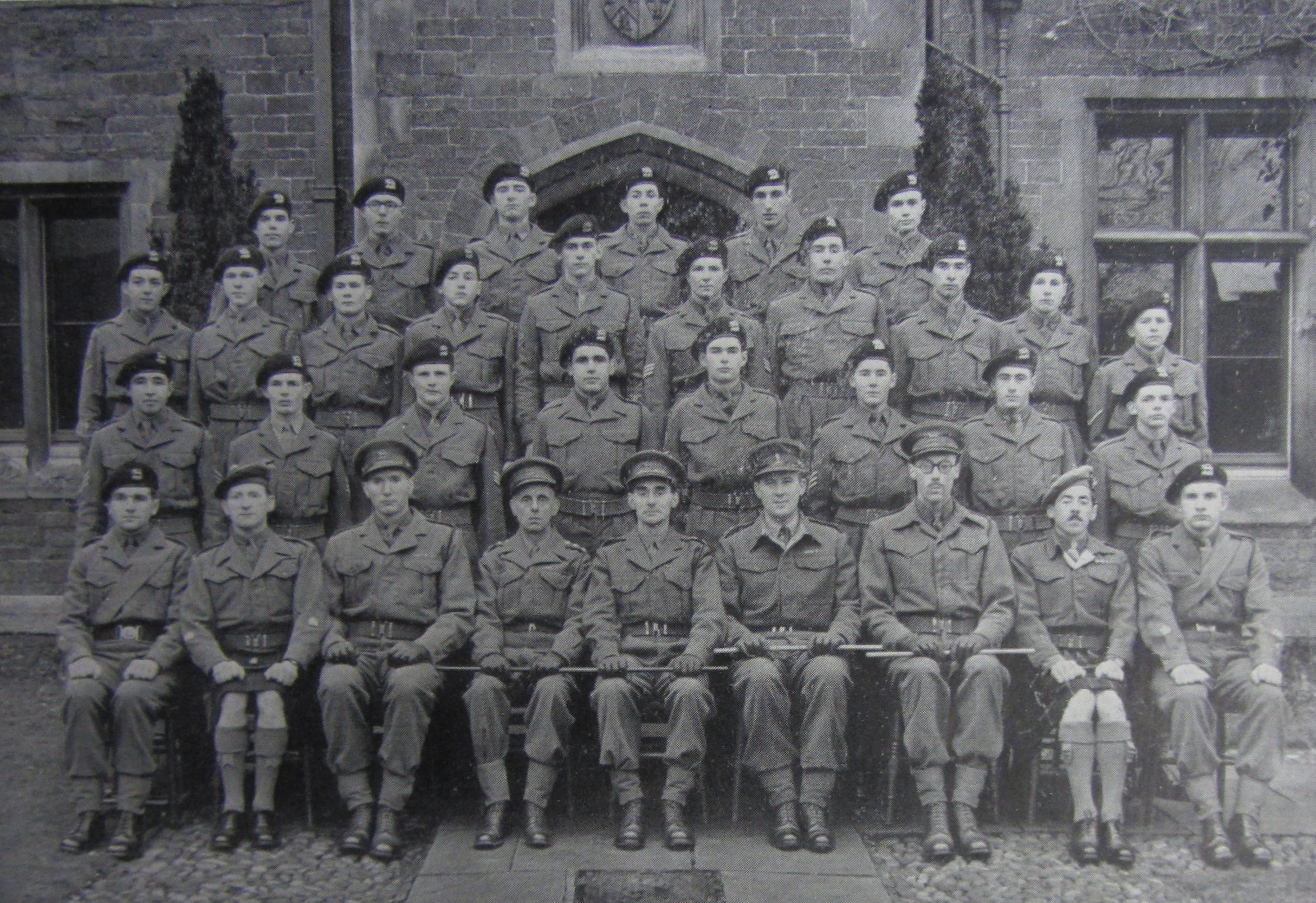 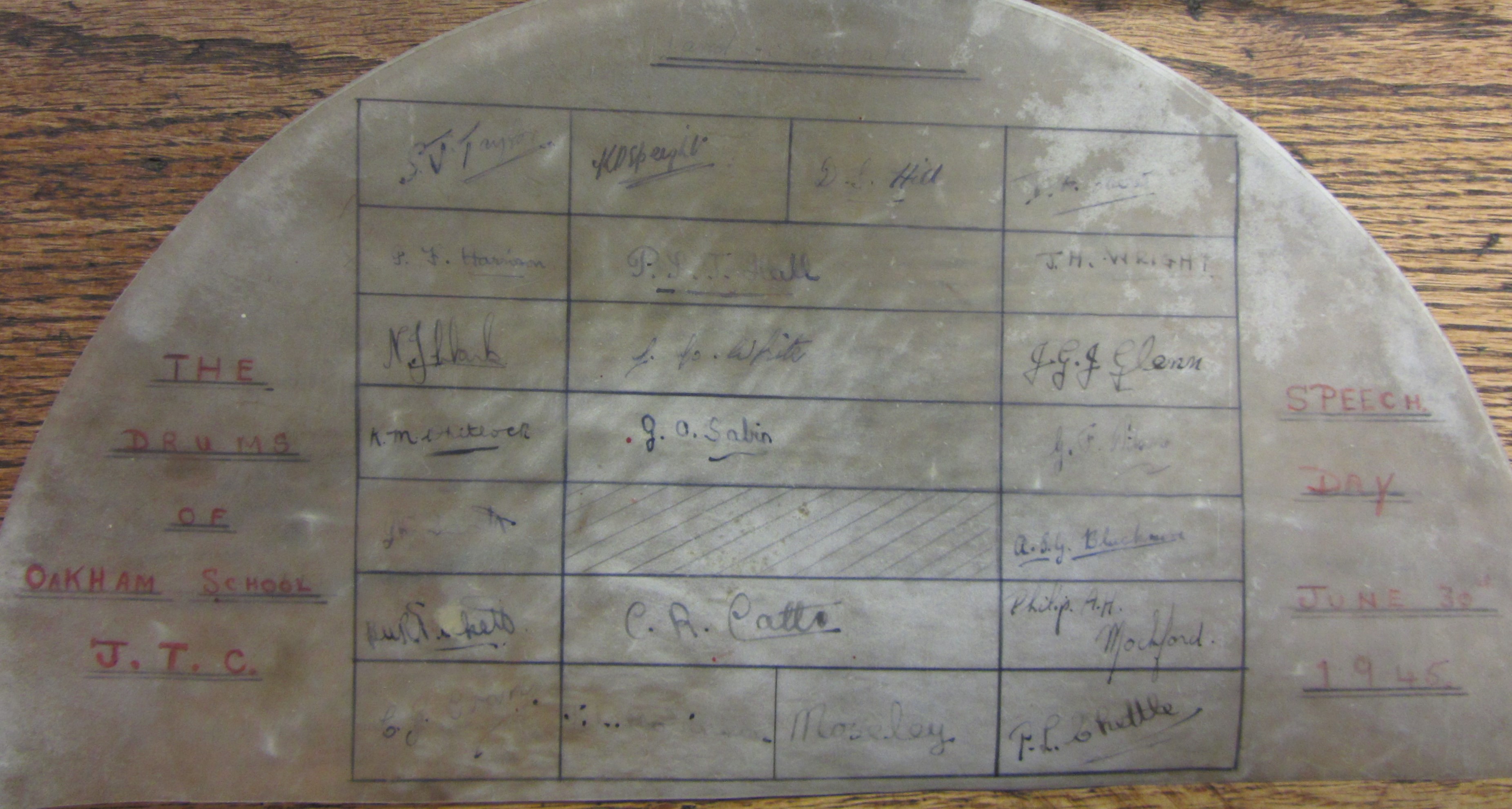 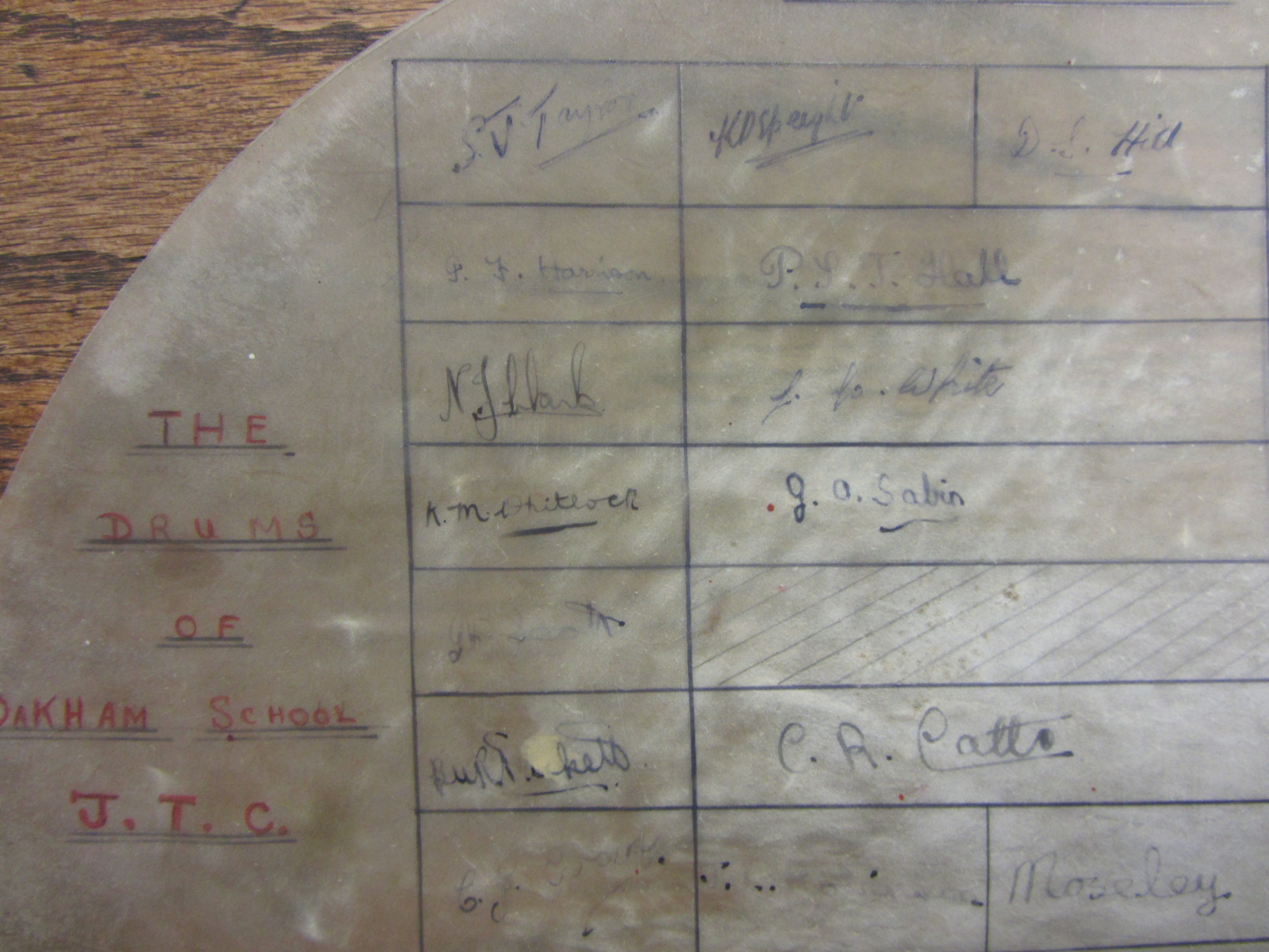 Detail of a drum skin signed by members of the CCF from 1945. Oakham School Archives Collection. Item number: ACS/2/1/4/2/3.

Oakham School’s Officer Training Corps (O.T.C.) had been in existence since 1910. It evolved into the Combined Cadet Force in 1948. The CCF in the interwar period has been described as a fun extra-curricular activity with field days in the 1920s and 1930s often comprising of large company attacks against other local schools such as Uppingham, Rugby, and Oundle.

However, we see a notable shift in the 1940s and 1950s towards a CCF preparing its cadets for National Service and engagements abroad.

Field days continued with the CCF travelling to local areas and undertaking various training exercises such as A company attacking B company in a defensive position, map reading, and field attack. Training in general very much shifted to focus on the key military principles of fire, movement and section/platoon attack. Sessions on communication, signalling, bicycles, vehicles, drill, rifle, and range work were undertaken on school property. The school came into possession of some two inch training mortars as well as forming a small artillery unit in 1953. 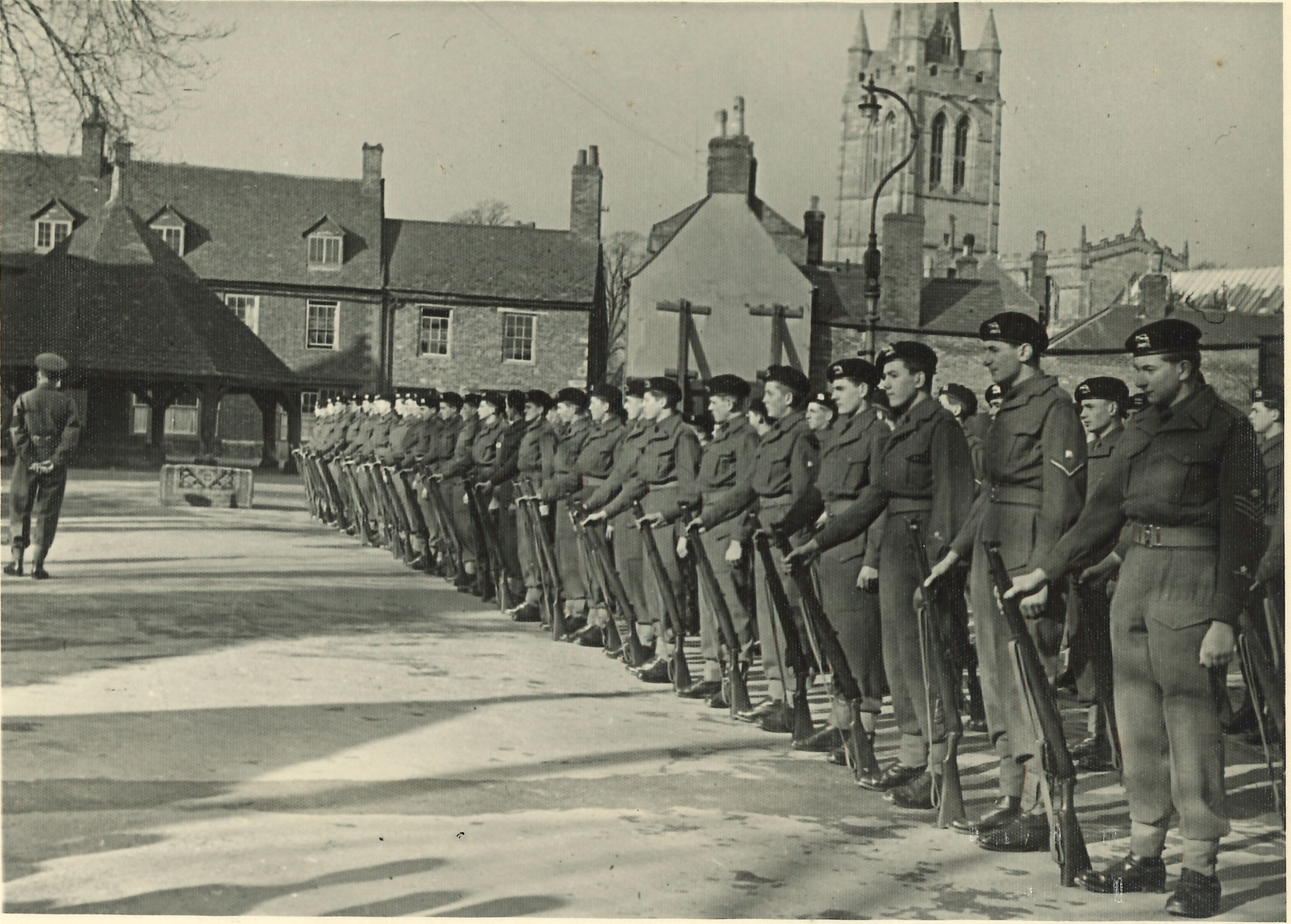 The school’s CCF ensured that members were trained and undertook the Certificate 'A' qualification. This was open to every boy in the J.T.C or A.C.F. The certificate was widely seen to have benefits for those going into National Service and these benefits were highlighted in the Oakhamian Magazine in 1947. 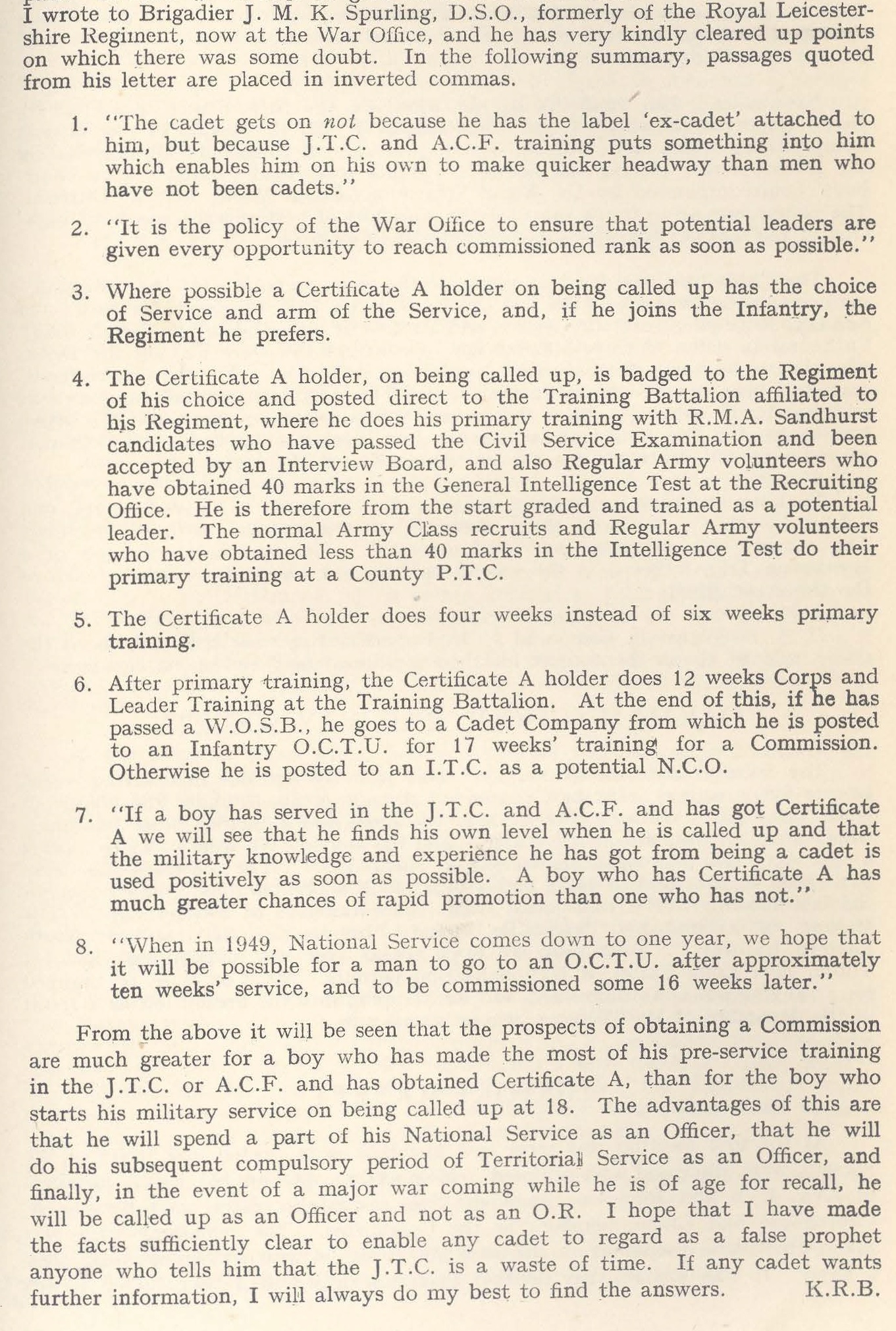 Such focus on this qualification highlights how the CCF were attempting to prepare their recruits for not just National Service, but for going further within their military careers to become NCOs.

Boys were consistently preached at regarding the benefits of undertaking National Service. Speech Day 1951 saw a General encouraging the boys to view their time in the armed forces as an “opportunity”. Adverts for the army, navy and air force feature regularly within the school magazine from this time. They promised scholarships for boys going into the navy and air force and adjustments for recruiting such as scrapping written tests to appeal to more boys.

Such a sustained exposure to the opportunities in a military career as well as encouraging boys to undertake training before their compulsory service, thereby fast tracking recruits up the ranks, reflects the wider concern that the British government had at the time for building up a large standing army to maintain Britain’s previous status as a world superpower. There is a sense that there were real attempts to make the armed forces sound like a promising career to young boys and consequently, entice more national servicemen to stay within the military after their two year service. 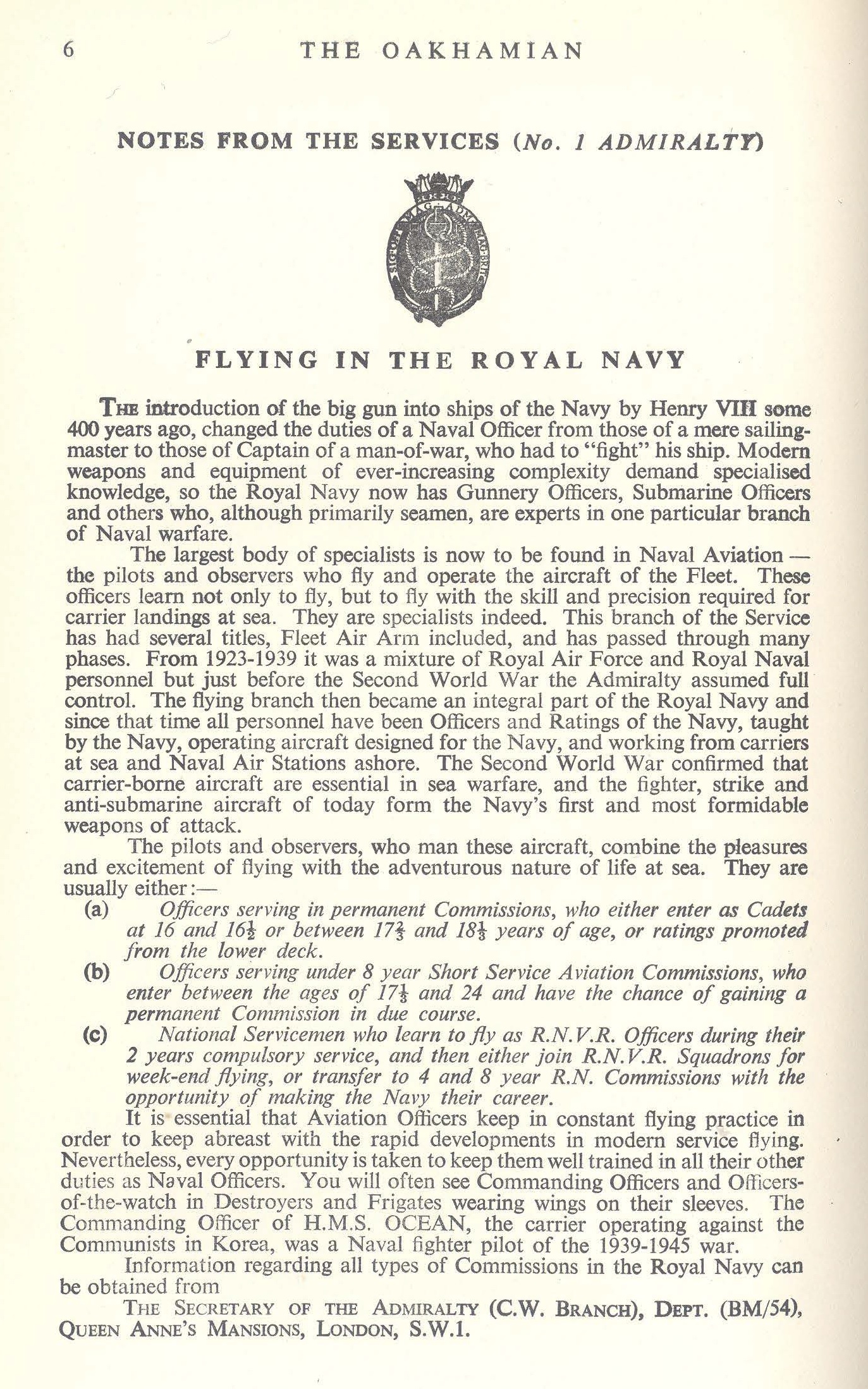 Advert for the Royal Navy 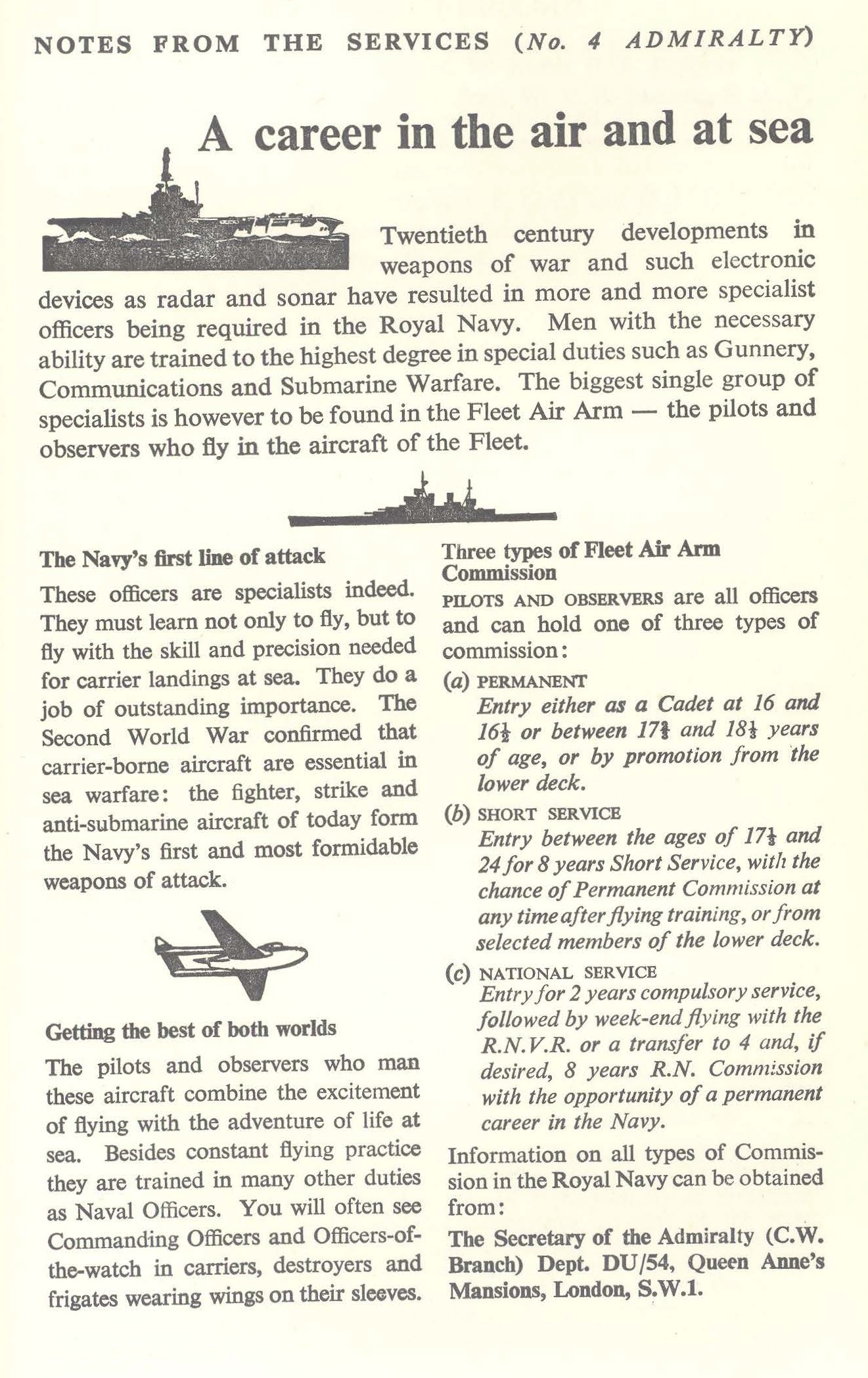 A career in the air and at sea

An advert in the school's magazine promoting a career in the Royal Navy or Air Force. Oakhamian Magazine, Summer term 1953. 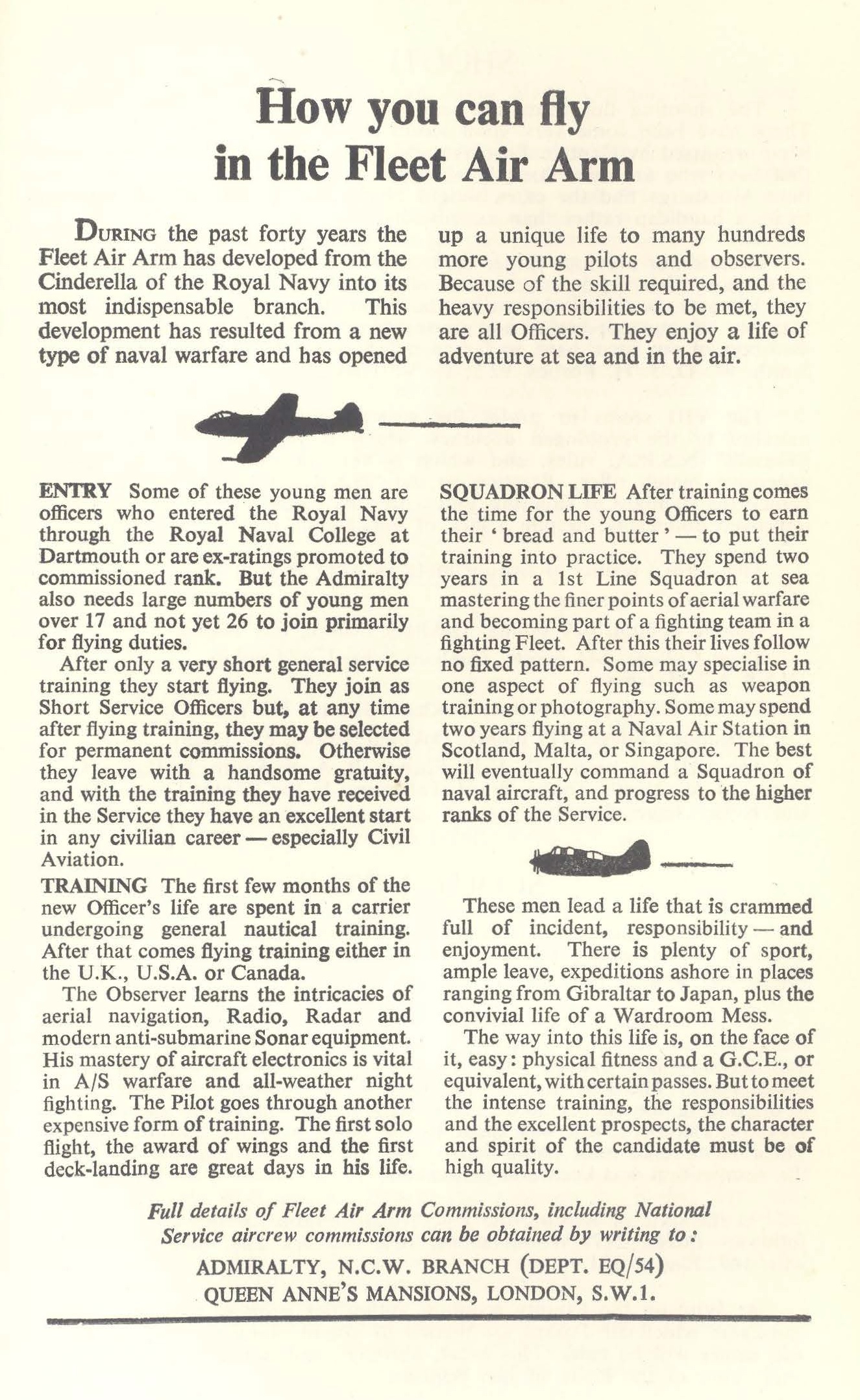 How you can fly in the Fleet Air Arm