As the war had reached a stalemate on the French and Belgian fronts, it was decided to launch an attack in another region. The Gallipoli Campaign, or Dardanelles Campaign, was an unsuccessful attempt by the Allies to control the sea route from Europe to Russia. 480,000 Allied forces took part in the 8-month-long Gallipoli Campaign.

Russia’s Grand Duke Nicholas appealed to Britain as the Turks were invading in Caucasus. The Allies decided to launch a naval expedition to seize the Dardanelles Straits, connecting the Aegean Sea and the Sea of Marmara, and allowing the Allies to link up with Russia in the Black Sea. The Campaign began with a failed naval attack by British and French ships on the Dardanelles Straits in February and March 1915. It continued with a major land invasion of the Gallipoli Peninsula on 25th April 1915 by Great Britain and Ireland, France, Newfoundland, India, Australia and New Zealand.

The Allied plan was to allow their ships to pass through the Dardanelles, capture the Ottoman capital, Constantinople, and knock the Ottoman Empire out of the war. The naval attack, spearheaded by First Lord of the Admiralty Winston Churchill and strongly opposite by First Sea Lord Admiral John Fisher, began with a long-range bombardment by British and French battleships on 19th February 1915. The Turkish force met the approaching Allied ships with heavy fire, and managed to stall their advance. Under tremendous pressure to renew the attack, Admiral Sackville Carden, the British naval commander in the region, suffered a nervous collapse and was replaced by Vice-Admiral Sir John de Robeck. On 18th March 1915, 18 Allied battleships entered the straits. Turkish fire and mines sank three ships and severely damaged three more.

Preparations then started for large-scale troop landings on the Gallipoli Peninsula. British War Secretary Lord Kitchener appointed General Ian Hamilton as commander of the British forces, which also included Australian and New Zealander forces and French colonies’ troops. The Australian and New Zealand expeditionary forces, or ANZAC, had been sent to Egypt to complete their training and bolster the British defence on the Suez Canal. They waited in Egypt until early April 1915 before being transported to the Greek island of Lemnos. The Mediterranean Expeditionary Force was composed of 75,000 troops, nearly half of them were New Zealanders and Australians. It was led by Ian Hamilton. Their plan was to capture Gallipoli Peninsula.

The Turks were under the command of German General Liman von Sanders. He positioned the Ottoman troops along the shore where expected landings would take place. On 25th April 1915, the Allies launched the invasion. The ANZAC were led by Lieutenant-General Sir William Birdwood. Due to navigational errors, the ANZAC landed 2km north of the intended site, in a narrow beach overlooked by steep hills and ridgelines. Despite heavy casualties, they established two beachheads. The ANZAC landed around Ari Burnu on the western side of the peninsula, north of Gaba Tepe, and lost 5,000 casualties. The British 29th Division landed at Cape Helles on the peninsula’s southern tip. Both landings were contained by fierce Turkish resistance and a trench warfare quickly took hold. Fighting was particularly intensive at Gaba Tepe, dubbed Anzac Cove in honour of the Australian and New Zealander forces who fought valiantly there. After the initial landings, the Allies were able to make little progress as the Turks gathered more troops on the peninsula from the Palestine and Caucasus fronts.

With the summer heat, conditions rapidly deteriorated, causing sickness, food became inedible and swarms of black flies. In August a new assault north of Anzac Cove was ordered, combined with a new landing. On 6th August 1915, the Allies launched a second major troop landing at Suvla Bay, a northwards advance from Anzac Cove towards the heights at Sari Bair, and a diversionary assault at Helles. The surprise landings at Suvla met little opposition at first but the Allies’ indecision stalled their progress, leaving the Ottoman reinforcements time to arrive and defend their positions. Hamilton, with Churchill’s support, petitioned Kitchener for 95,000 reinforcements. But barley a quarter of that number was sent to Gallipoli. In mid-October Hamilton argued that a proposed evacuation would cost up to 50% casualties. He was recalled and replaced by Sir Charles Monro. By early November 1915, Kitchener had visited the region and agreed with Monro that the remaining 105,000 Allied troops should be evacuated. The British government authorized the evacuation to begin from Sulva Bay on 7th December 1915. The last troops left Helles on 9th January 1916.

The Gallipoli Campaign was a defining moment in the history and national identity of both Australia and New Zealand, revealing the soldiers’ characters of determination and camaraderie. 25th April has been celebrated every year since 1916 as Anzac Day.

In May 1915, the First Sea Lord Admiral John Fisher resigned over the mishandling of the Gallipoli invasion by First Lord of the Admiralty Winston Churchill. Churchill resigned later and accepted a commission to command an infantry battalion in France.

In the Ottoman Empire, the emerging figure of Mustafa Kemal became Atatürk and the founding President of the Turkish Republic. 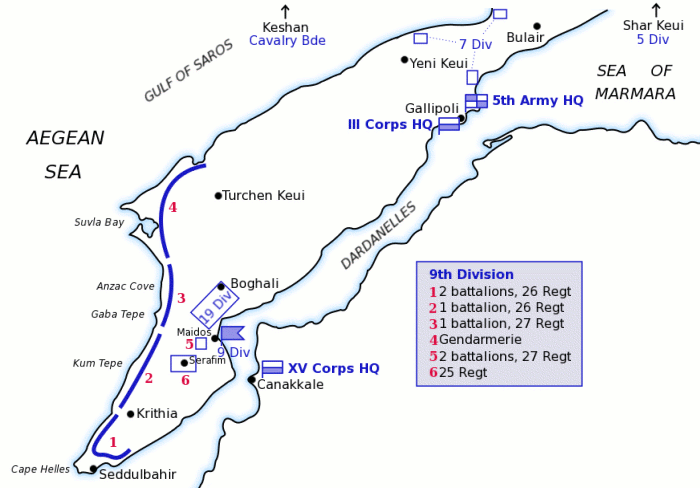 Old Oakhamians who Fell at Gallipoli 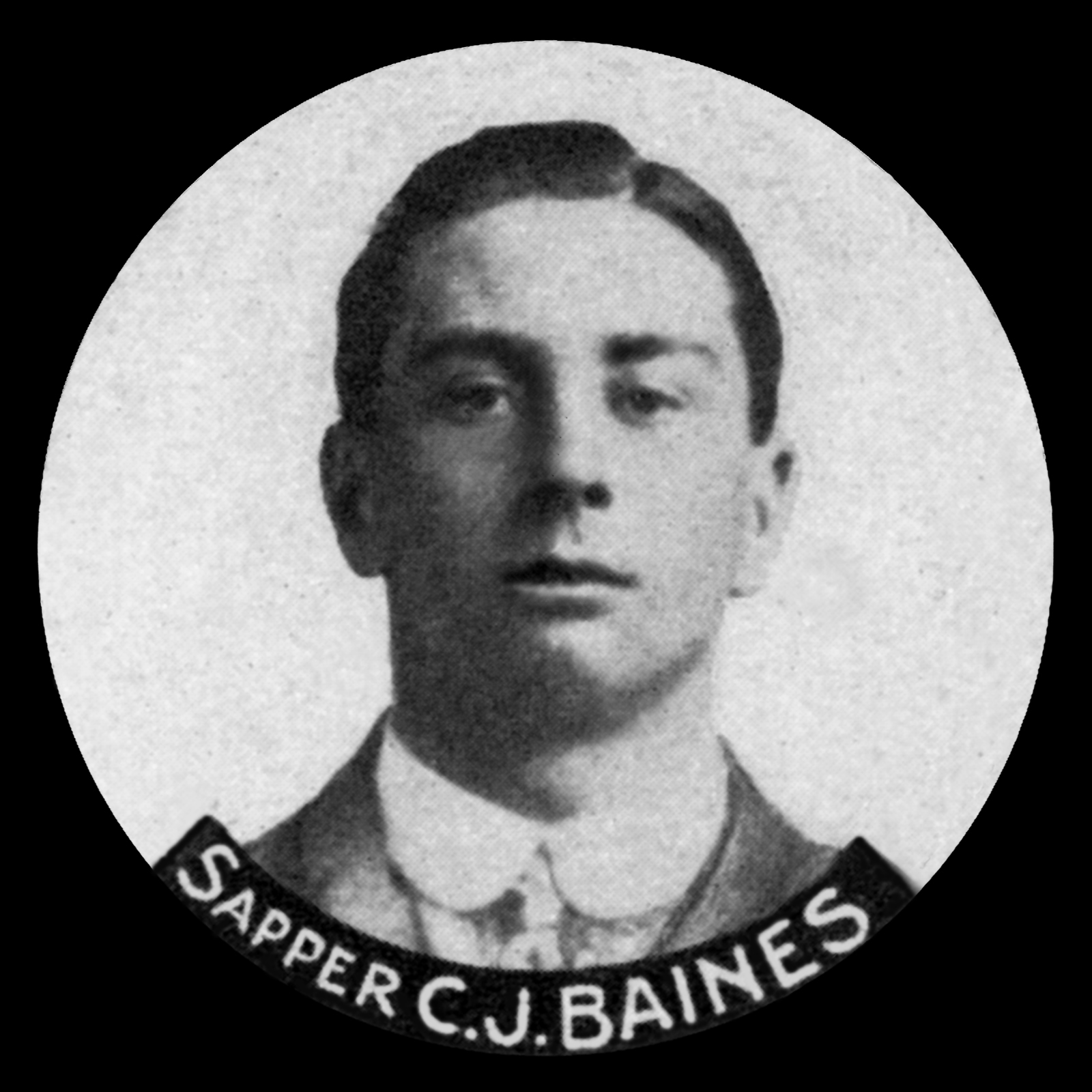 Cyril attended Oakham School between 1908 and 1913. His school achievements are listed below:

After school, Cyril went to work with his father in the building trade. He enlisted in August 1914 with the Royal Engineers. He went to Gallipoli in June 1915 with 66th Field Company Royal Engineers. 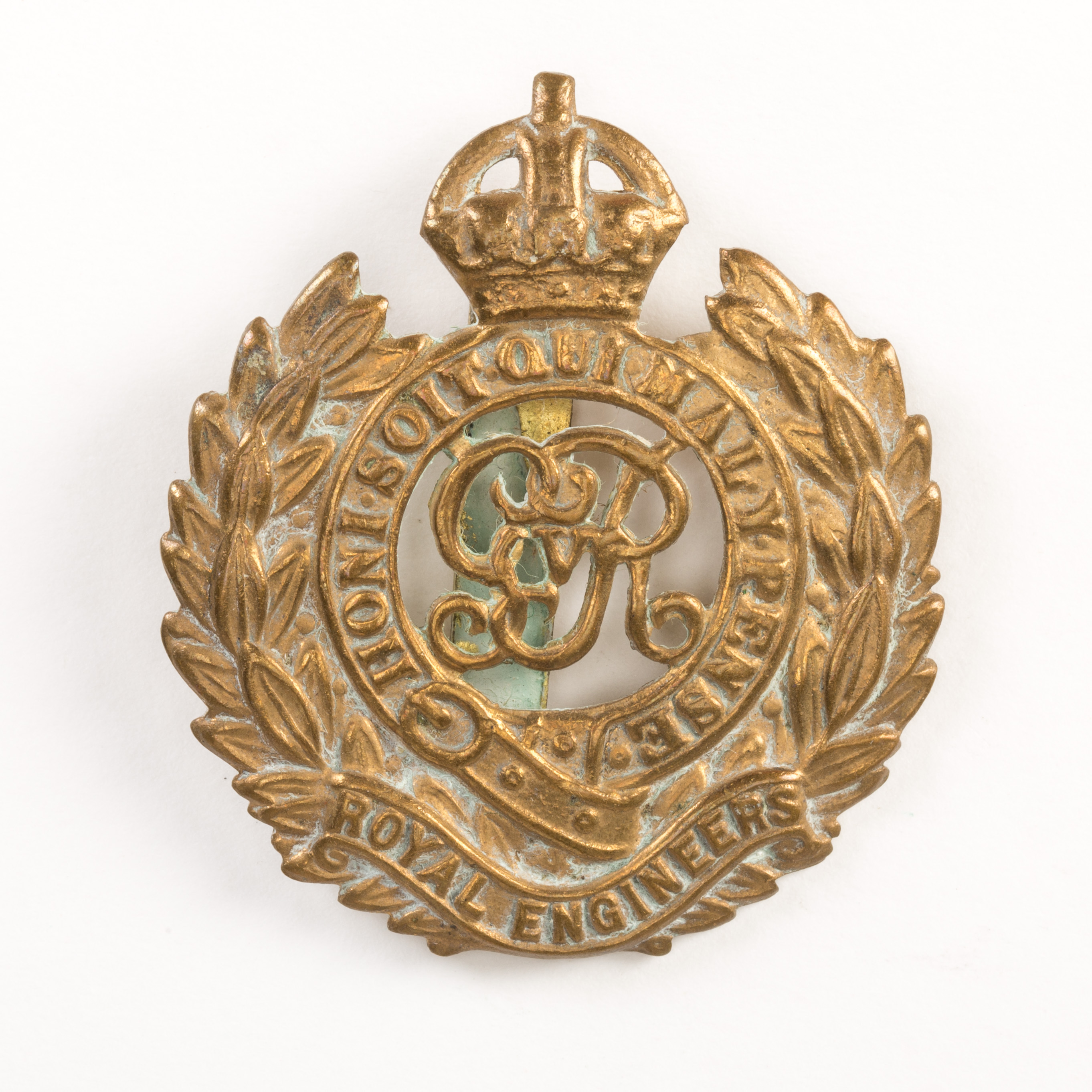 Cyril was killed on 16th August 1915 by a shrapnel ball at Jephson’s Post above Anzac Cove. He was 19.

Cyril was buried at Kiretch Ridge but his grave has been lost. He is remembered on panel 24 of the Helles Memorial, Turkey and in Oakham School chapel. 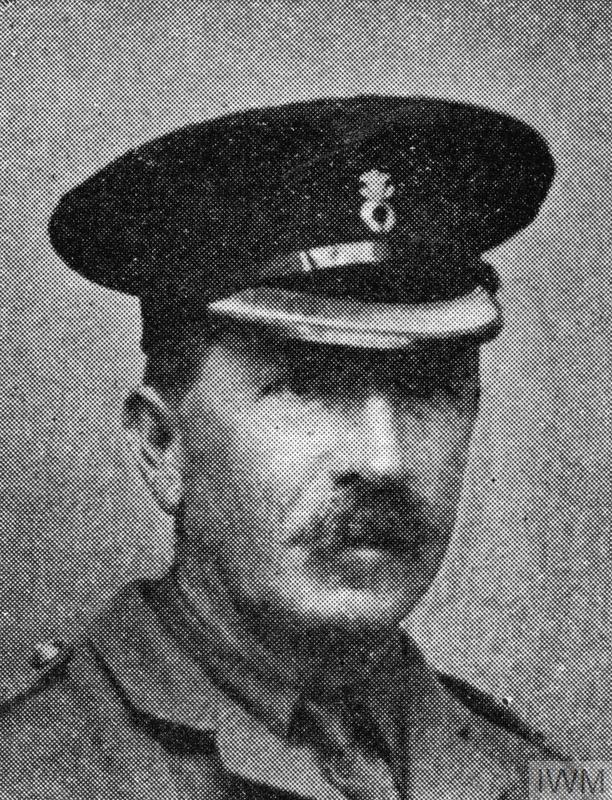 Francis attended Oakham School between 1880 and 1881 in School House. Unfortunately, we do not own records of his time at school.

He became a career soldier. He was appointed Second Lieutenant with the Loyal Northamptonshire Regiment in November 1887 and became Lieutenant in March 1890. In September 1890, he joined the Indian Army in the 4th Rajputs then the 14th King George’s Own Ferozepore Sikhs. He was involved in the Hazara Expedition in 1891, the Warizistan Expedition in 1894-1895 and the North West Frontier of India operations in 1897. 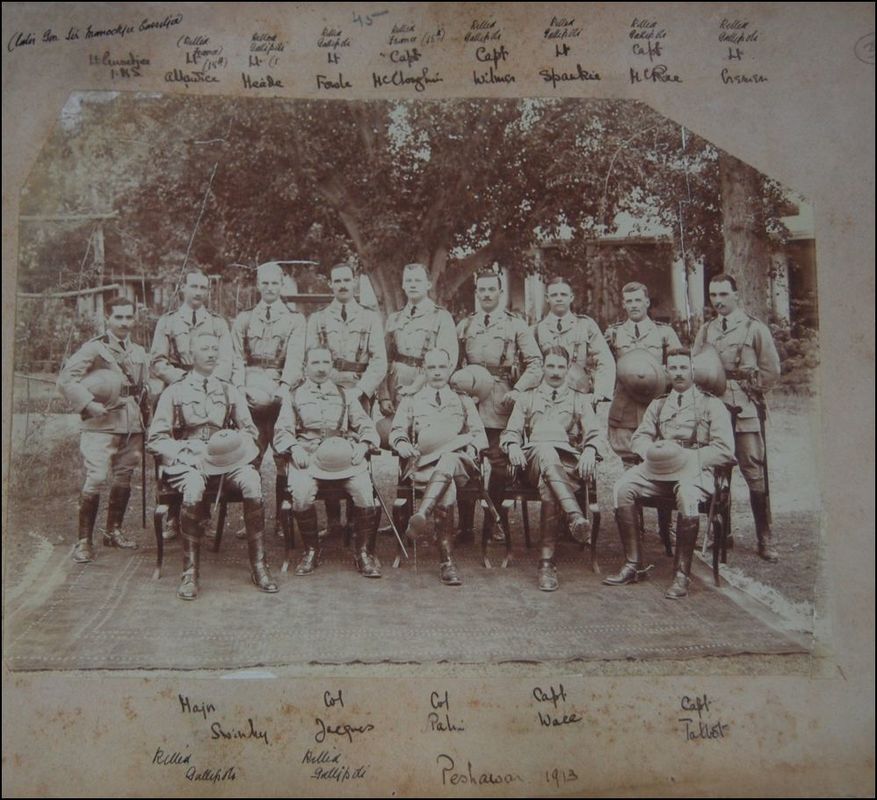 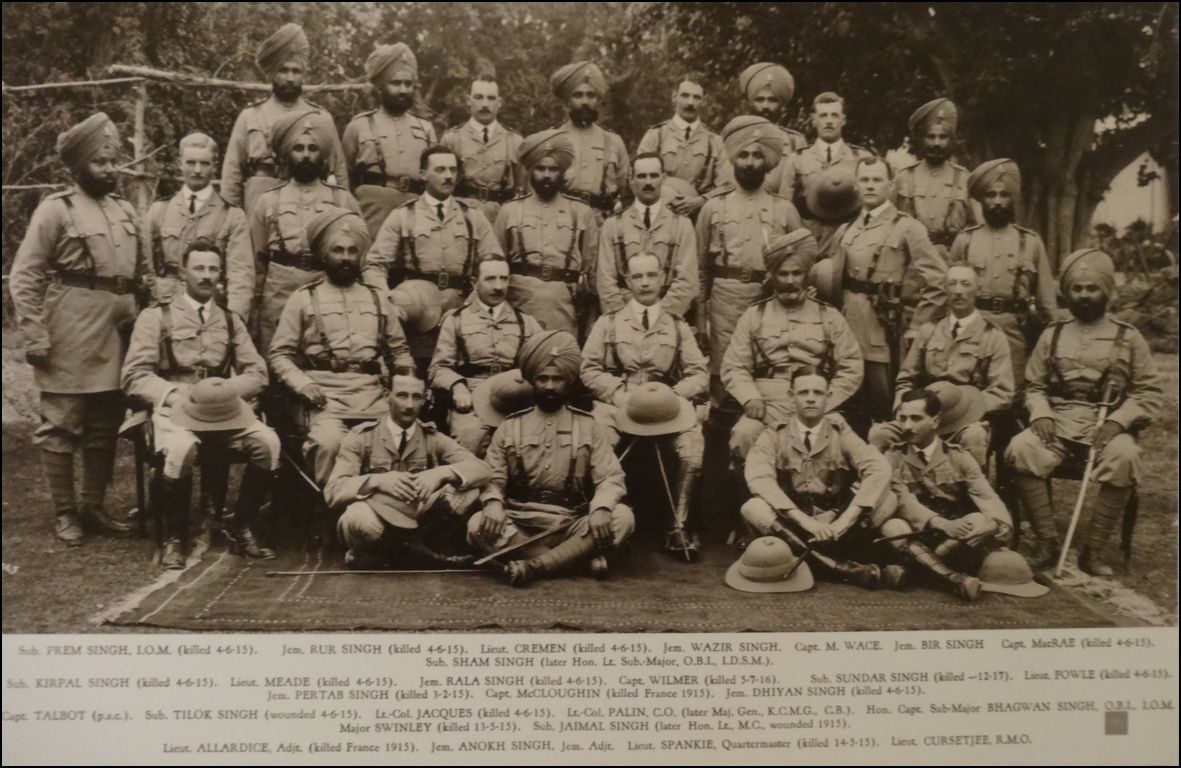 Lieutenant-Colonel Jacques is sitting on the second row, third from left.

As Second-in-Command he led his regiment to Egypt and defended the Suez Canal. The regiment were then sent to Gallipoli and landed near Helles. Francis was killed in action on 4th June 1915 during the Battle of Krithia against the Turks. He was 48.

Lieutenant Colonel P. G. Bamford wrote: "4th June was a beautiful summer's day. The artillery bombardment took place according to plan but produced little effect. In Gully Ravine, Lieutenant Colonel Jacques led No. 2 Double Company foreward with great gallantry in the face of very heavy fire. They encountered numerous machine guns in hidden positions on both sides of the ravine and both officers were killed almost immediately."

His Commanding Officer wrote: “Your husband’s death is a terrible blow to me.  I miss his help and advice, which he was always willing to give.  We have lost in him a splendid and capable officer who will be difficult to replace.  A General Officer, in writing to me on the 7th June, asked me to say, when writing to you, how struck he was, during the three weeks previous to the 4th June, by his pluck and energy.  ‘He was the life and soul of the organisation of the defence of the part of the line in his charge, always busy and cheerful, and I regret his loss intensely.’  These are the General’s words.”

A brother officer wrote: “Your husband was wonderfully calm and cool in action, much the same as when on parade, and it did one good to see him and be near him.  He did not seem to know what fear was.”

Francis was buried where he fell but his grave was lost. He is remembered on panel 256 at Helles Memorial, on South Ribble Civic War Memorial and in Oakham School chapel. 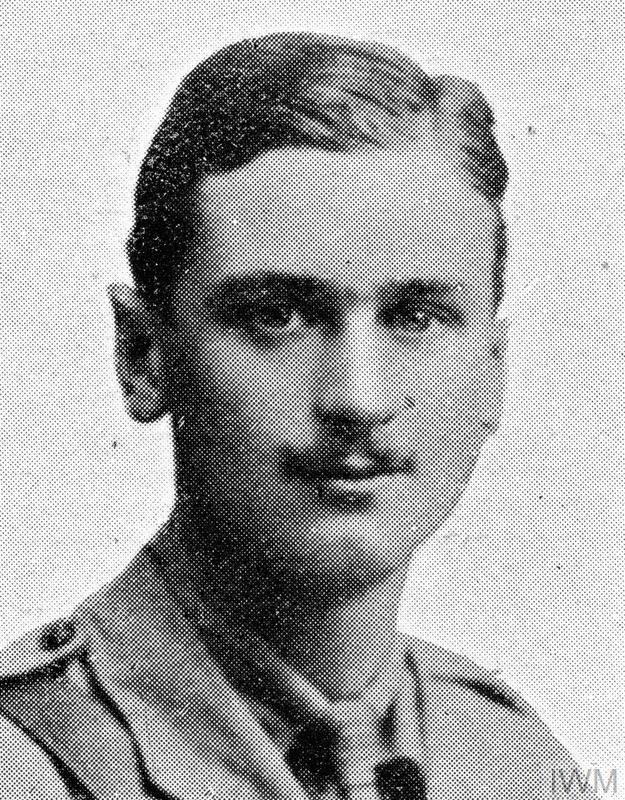 Humphrey was born at Lyndon Rectory to Thomas and Ethel Nevinson. The family moved to Medbourne, Leicestershire in 1909.

Humphrey attended Oakham School between 1905 and 1909. His school achievements are listed below: 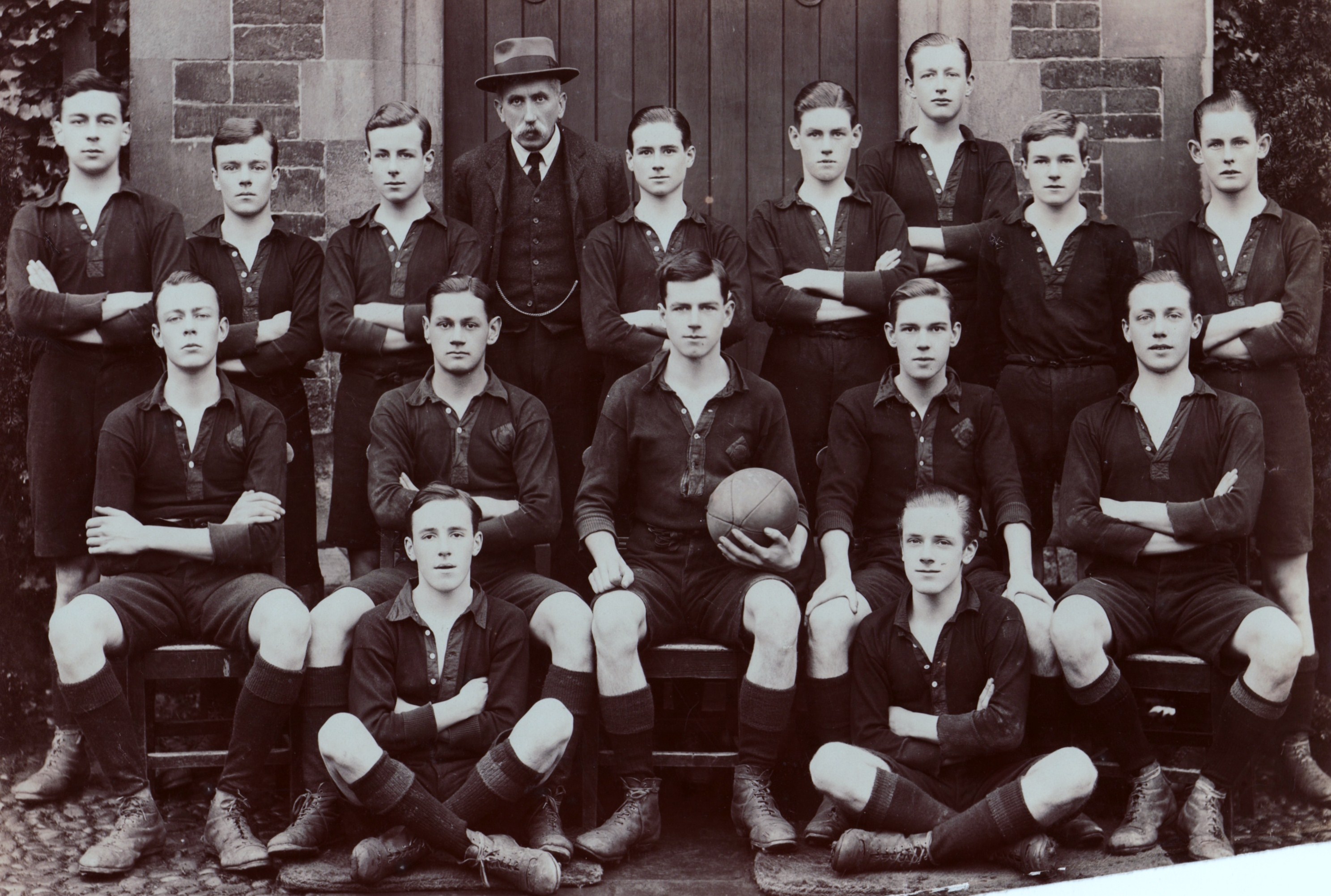 Oakham School Rugby 1st XV 1908 - Humphrey is standing in the centre (behind the captain). 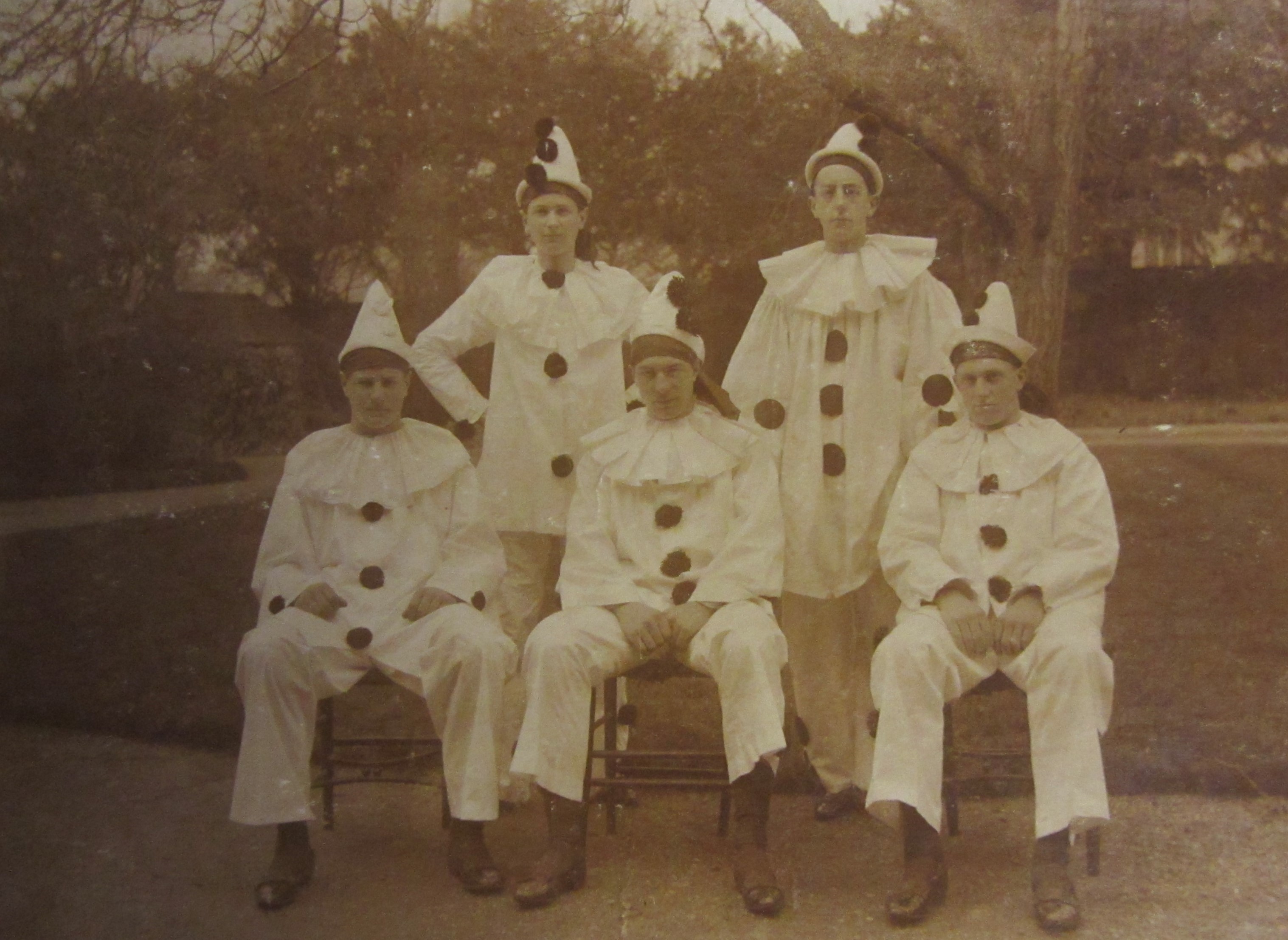 Easter term 1908 Entertainment group - Humphrey is standing on the left.

Winter 1908 Rugby review: ‘Showed promise as a forward but proved out of his place at three-quarter, to which position he had to be moved later on in the season; very uncertain in both taking and giving passes, and though he invariably went hard for his man, too often missed him.’

After school, Humphrey went to Keble College, Oxford University. The HKB Nevinson Esq’s XV came to play against the school in 1911. Humphrey worked at Oldham Brewery and joined the Manchester Regiment. He became a Second Lieutenant in the 1st /10 Battalion. 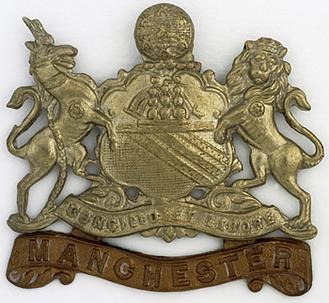 His battalion sailed on the Avon to Alexandria in September 1914. Humphrey fought at the Suez Canal then took part in the Gallipoli landings. He was wounded during the Battle of Krithia on 4th June 1915. He was sent to the hospital ship Somali where he died of wounds on 5th June 1915. He was 23.

Humphrey wrote to his mother after being injured: "My dear mother, just a line to let you know I am still very fit. I know you will always be anxious for news. That is why I just send a scrap. I really have no time for more, as we are frightfully busy now, digging day and night. I am a qualified navvy and engineer now. We are still attached to the Royal Fusiliers, and I am getting on very well. My best love to all and thanks for the letters dated May 13th. Your loving son HKB Nevinson."

Humphrey is not mention in the school’s Roll of honour.

Humphrey was buried at sea. He is remembered on panel 159 at Helles Memorial, in Medbourne Church and war memorial, on the War Memorial in Stamford and St Martin’s Church and in Oakham School chapel. 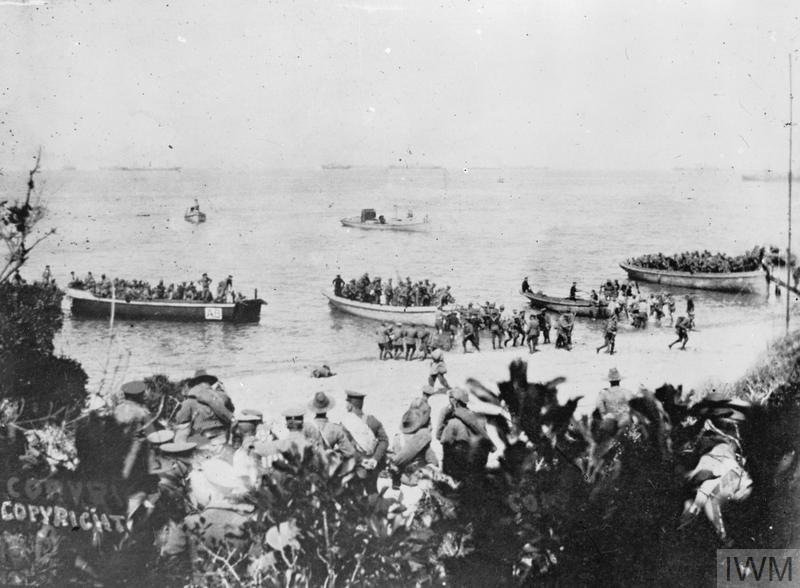 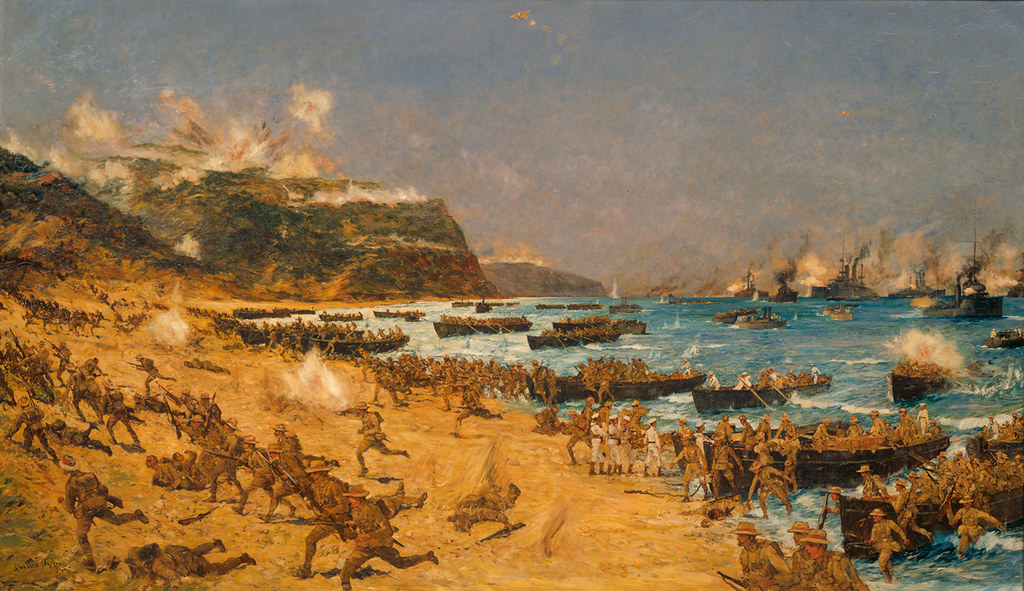 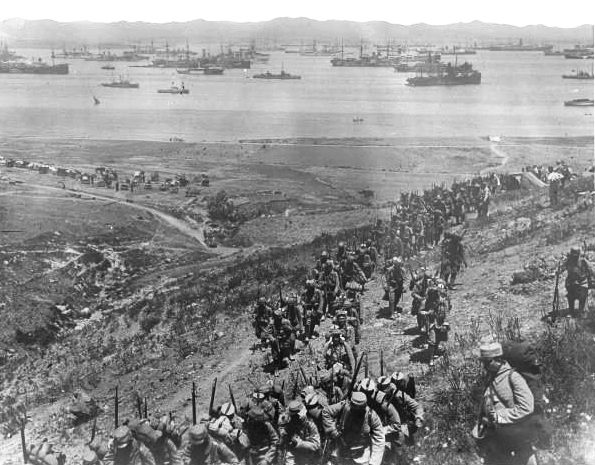 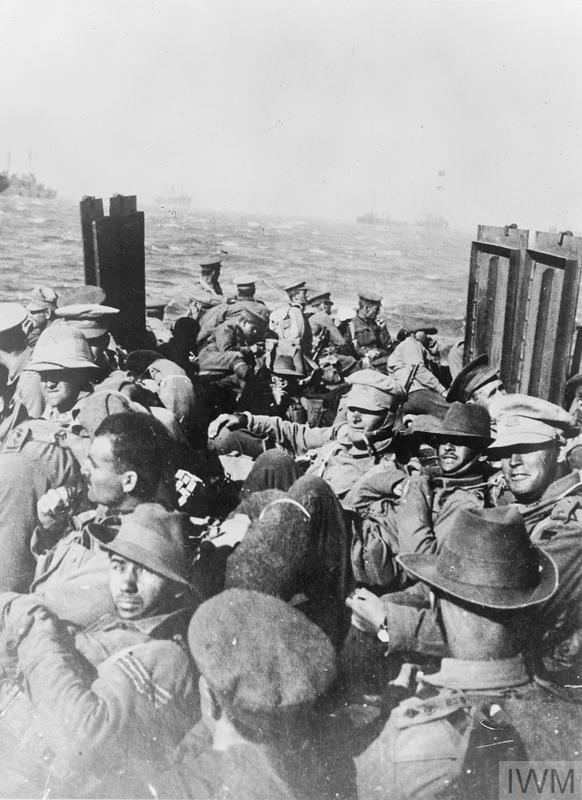 New Zealanders return to Gallipoli by picket boat after a rest in Lemnos. © IWM HU 53360