Citing and Referencing (APA): Using sources in your writing

As with any other form of writing, when working with sources it is important to find your own voice and weave your evidence into that. Your work should not just be a compilation of all the ideas you have found - it should be your own original ideas backed up by evidence. The best way to understand how to use sources in your writing is to read a wide range of academic books and papers and notice how other scholars do it. However, here is a quickstart guide to get you going.

Imagine you are working with this source:

This technique of mystery runs through the whole novel. As with most mysteries, however, the curiosity is more intriguing in the beginning than toward the end if only because the eventual revelation of the “true story” resolves rather than increases the suspense. We have seen how Gatsby's background and economic enterprises have been purposely obscured through repeated narrative frequency, by having the information being retold and repeated with different content by several characters. This mystification of Gatsby is an important part of creating narrative movement and progress and therefore sustains a flow in the early chapters that encourages the reader's inclusion.

Salmose (2014) suggests that “[t]his mystification of Gatsby is an important part of creating narrative movement and progress” (p. 67).

A sense of mystery surrounding Gatsby is generated at the start of the novel, as his “background and economic enterprises [are] purposely obscured through repeated narrative frequency” (Salmose, 2014, p. 67)

If you do quote directly it is important to comment in some way on the quotation to explain how it advances your argument.

If the ideas are more important than the exact words, you may choose to rewrite them in your own words. If your rewrite is roughly the same length as the original then it is called a paraphrase, if it is much shorter it is called a summary, but both are treated in the same way for citation purposes. In this case a page number is not necessary (but you can add one if you want to).

Salmose (2014) notes that Fitzgerald creates an air of mystery around Gatsby by having a number of different characters tell different versions of his backstory, and suggests that this has an important role in drawing the reader into the flow of the story in the early part of the novel.

Note that it is not acceptable to paraphrase by taking the original sentence structure and changing a few words. This is a form of plagiarism.

e.g. "Gatsby's background and economic enterprises have been purposely obscured through repeated narrative frequency by having the information being retold and repeated with different content by several characters" should not be rewritten as Gatsby's past and business dealings have been deliberately hidden through repeated narrative frequency by having stories about him told differently by different characters.

At first glance this doesn't look too bad, but the problem is that this writer has just taken another writer's sentence and substituted the odd word (see below). It is possible to do this without having any understanding of the original sentence and this is not an acceptable way to paraphrase at this level.

If you need to stick this closely to the original sentence structure, then you should just quote directly. The best way to paraphrase is to read the sentence or paragraph you want to paraphrase and then cover it up and rewrite the ideas in your own words. That way you are less likely to produce incorrect "pseudoparaphrases" like the one above.

Sometimes a text you are reading quotes another text. In an ideal world, if you want to use ideas from this second text you should track it down and read the original, but in many cases this may not be practical. Do not pretend you have tracked down the original source if you have not. Instead, acknowledge the source as an indirect citation:

As Gautam Kundu has recognized, the world in the first part is “made gorgeous by the magic touch of a romantic imagination that nevertheless moves inexorably toward eventual disintegration and dissolution” (34).

Kundu describes the world of the early chapters of The Great Gatsby being “made gorgeous by the magic touch of a romantic imagination” (cited in Salmose, 2014, p.67)

The early chapters of The Great Gatsby could be described as having been “made gorgeous by the magic touch of a romantic imagination” (Kundu cited in Salmose, 2014, p.67)

There is no way to produce this effect in brackets in Word's citation tool - just type it. However, you must make sure that you import the 'Salmose' source into your citation manager (see above) with the others so that it appears in your bibliography even though, as far as Word is concerned, it is not referred to directly in your essay in am embedded citation. 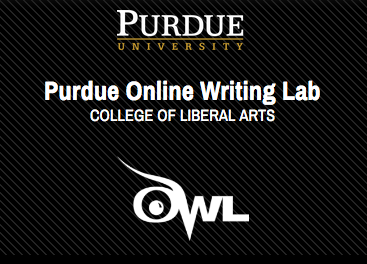 There is some excellent advice on citing sources in your text and how to lay out quotations and paraphrases correctly here on the Purdue OWL site. When reading it for the first time you might want to skip the first paragraph on "In-text citation capitalization, quotes, and italics/underlining" and read the advice on quoting and paraphrasing first.

Do you have a more complex citation problem? Perhaps you have a work with a large number of authors and you are wondering if there is a way to make the citation less intrusive.Perhaps you want to know how to deal with multiple works by the same author in the same year, or by different authors with the same surname. This page on Purdue OWL has lots of answers for you.

NOTE: The advice given about interviews is correct for APA but for IB students is superseded by IBO regulations. See the Interviews, emails and personal communications tab for details.

Word supports some of these suggestions but (for example, if you want to use the "et al." abbreviation for in-text citations of works with 3 or more authors) you will need to put them in manually. This does not mean you can't use the citation tools in Word to generate your bibliography - you should enter the "New Citation" as normal so an entry is automatically generated in your bibliography, but when you need to put the citation in the text just type it rather than inserting it from a menu. Contact the Library staff if you need help with this.

The IB Guide Effective Citing and Referencing (2020) says "This is usually a list, in alphabetical order, of the authors (last name first), whose words and works have been cited in the work. The title of this section varies from one style guide to another." (p.12). You should not separate sources by type (unless there is specific guidance for you need to do so for a particular assessment) - the type should be clear from the reference.